Interview with Sethu FC captain Indhumathi: “Being a captain made me more vocal and confident within myself”

At 25, Indhumathi Kathiresan has already gone some way to announcing herself to the realm of Indian Women’s Football, the Sethu FC attacking midfielder one of the stars of the 2019 SAFF Cup Championships in Nepal.

Indhumathi’s incredible journey of resilience began literally in the eye of a storm. The daughter of a fisherman from coastal village of Cuddalore. But what kept her moving on was football, and her coach Subramanian Mariappan, a retired school headmaster. She went on to play for the Tamil Nadu Women’s team. She leads Sethu FC team now for the second season and recently captained India for the first time in an International friendly. To many pundits of the game, Indhumathi is touted as the one to look out for. The Cuddalore girl spoke exclusively to Fisto Sports, stating she is relishing her opportunities in the limelight after stepping up from the recent national development squad in the past year.

To start off, tell us a bit about your early years. How old were you when you first started playing football and did you always want to be a footballer?

It all began when I was studying 7th standard. I used to play football for fun with my friends in Cuddalore. At the time, my P.E.Teacher Tara suggested me to take up football since she saw the spark in me. My village in Cuddalore, I grasped football lessons from coach Mariappan sir. From there, I found my passion and my love for this game. Honestly I would not have started football had it not been for the support I received from my coach Mariappan. He took responsibility for not only training a big group of girls from poor families, but even supported them by providing free education as his own family members. He was more than a father figure to us. Mariappan has been with me through my ups and downs, especially during my downs and motivated me to fight through. Since , I have come from very humble beginnings and am extremely grateful that he believed in me and my dreams and have fully supported me on the journey.

When did that fire ignite? When was it that you knew you were made for the sport?

Being a footballer I always connect well with the passes and had an eye for goal may be that was the advantage for me. I was selected in the Under-18 Pondicherry state team as a midfielder after a few months after I joined the National camp. I used to enjoy playing the sport. And I never had any aim to make a career out of it mainly because I was unaware of the fact that women’s football exists in the country. The current National Women's team coach Maymol Rocky were impressed with my playing and made me believe that if I continue to play like I did, I could look forward to a bright future where football is concerned. Of course, growing up there were many athletes that I looked up to. In football I would have to say it was Lionel Messi. As a kid growing up I was in awe of him, his ability to dribble past the defenders at ease and scoring incredible number of goals abundantly is a joy to watch. Messi is just out of this world phenomenal.

Have you fully emerged yourself in Sethu FC?

I’m really enjoying my time here at the club and its attacking football. I’m so glad that Sethu FC has given me the opportunity to prove myself. I have been at the club a few seasons now and I feel like I have progressed a lot.

What did you learn in your first year as captain and how will that help you this season?

Being captain of the team from last year has been brilliant and an honour. It developed me as a player a huge amount, I became more vocal and confident within myself. It was great to see the majority of the players from Tamil Nadu finally make it to the National side. Being on this team also helped me grow so much as a player. I made a lot of good friends through this and it's something I won't ever forget.

You were part of the India’s squad that won the SAFF Cup 2019. How do you look back on your involvement in that achievement?

It was a fantastic experience and to see what the tournament did for me and the attention it received and the reaction to us winning it. I believe we helped to put women’s football on the map in India. I had a good time in the tournament even more by the fact that I was the joint top-scorer in the tournament. And after that moment I believe that I have matured a little more.

What can you tell me about your current national team manager Maymol Rocky?

She knows how to really get her message across that we are one team and she manages to make everybody feel appreciated and I believe she does that really. Even when I fall short of confidence, she made me believe in my ability to succeed. She gave me the confidence to keep going and want to play more. She is also a manager than can read women well and that enables her to create a good team spirit amongst the squad.

What is the main strength of this Sethu FC team?

The main strength of the club is our collective qualities. We have players that fight for one another and our team spirit is very good. Our team building is fantastic and as teammates, we can always count on one another. Last season, we made it to the semi-final and this season we want to win the title. 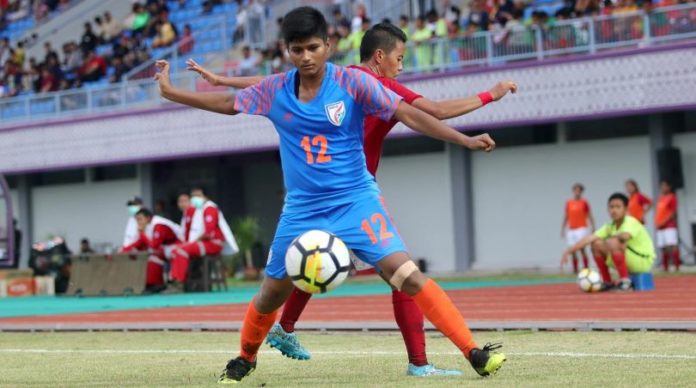 They say experience counts and that it’s the best teacher. How far do you agree to this where your journey is concerned?

Definitely, it does! Experience not only makes you a better player but also makes sure that you improve with every game that you play. Having experienced players such as Ratanbala Devi, Dangmei Grace and Ashalata in your side also makes a huge difference.

Yes, there are a lot of things that have changed and for the better where women’s football in the country is concerned. The exposure of playing in different countries has also made the difference which serves as a major source of encouragement for women. I feel the full recognition will come soon and it is exciting to see. But it is definitely progressing and I would like to see it one day be level with the men's but who knows if it will ever make it there.