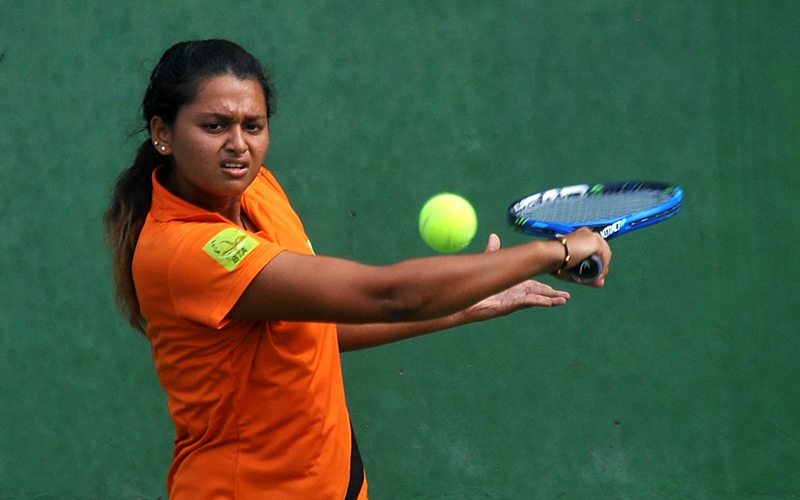 Yubarani Banerjee is a special tennis talent who has lived up to the lofty expectations that were set in front of her at a young age.

Hailing from West Bengal, Yubarani has developed her passion for tennis since she was 8 years old when her father took her to a tennis club. It all started as a hobby eventually it turned into an obsession, later transformed into a full-time profession.

Her father Arabinda Banerjee was a footballer in his heyday and also an employee of the Indian Air Force. So, Yubarani had the opportunity to be the best in what she aspired to do and is still continuing to do so.

Yubarani, who is currently studying at Supreme Knowledge Foundation Group of Institutions, put in some truly wonderful performances down the years, winning a bronze medal at the Khelo India Youth Games, Guwahati, 2019, and is part of the Pune Warriors team that won the second edition of the Tennis Premier League title in Mumbai, 2019.

Yubarani’s love for tennis is such that she is always ready for a game.

The 20-year-old ticks the fundamental boxes of qualities as you’d expect from most tennis players. Forceful, quick and powerful, Yubarani brings a different brand of play to the table. For a player like her, serving is incredibly important and one of her biggest strengths, whilst, despite her tender age, she also possesses great confidence on the court.

Having Serena Williams as her role model, Yubarani looks up to Serena’s impressive play and her attitude on and off the court.

Arguably one of the best young talent in Indian Women’s Tennis, Yubarani seems to possess infinite potential. Under the development of the right coach, there is no doubt that Yubarani will be one of the best players a few years down the line. And while she isn’t spoken of as much, her continual progress ensures the great future she will have. A star in the making.

You are very young and have quite a few titles under your belt, and I am sure it must have been a quite whirlwind journey, so first of all, tell us, how did it all start? What inspired you as a child to take up professional tennis? Take us through your path to Tennis.

When I was 8 years old, my parents took me to the nearest tennis court which is close to my house and they insisted me to take it up as a hobby. But day-by-day, I fell in love with the game and it has become my passion and profession.

Who were your idols early on and what is it about their character or achievements that you admired?

During the early days, when I started playing tennis my idol was Serena Williams. She always triumphs in the face of adversity, surmounting the stumbling-blocks lying in wait along the path of a true champion, both on and off the court. Her victories on the court are not just sporting triumphs, they are a victory for all women who, like her, are ready to tackle any challenge.

When did you start taking Tennis seriously and who played an important role in helping you realise your potential?

Just after a year, since I started playing, my coach pushed me to play a local tournament and I managed to reach the final, after this my family took my passion seriously and supporting me till date.

I won my first U-14 singles and doubles crown in Kolkata. I was overwhelmed and happy. But my father said ‘don’t be satisfied yourself so easily, it is just a beginning you have to go for miles.’

My parents are my biggest support till date, no matter what were the circumstances, they always give me mental strength and positive vibes. Before every match, they said ‘don’t think what will be the result. Give your best, your opponent should have a tough time playing against you.’

I was not brilliant but I was quite intelligent and managed to get decent marks. My school was supportive, that’s why I could play matches and tournaments on regular basis.

My strength is my serve. I really feel it is a very strong part of my game.

Despite your young age, you seem to shoot well under pressure. Please tell us about your mental game.

Well, I don’t think much while I am into a match. Yes, playing under pressure is an obvious thing, But I try to keep myself focused and positive.

Whenever I am into practice and my coach asks me to play a match, it is always healthy. It never gets ugly or too intense. It is always a friendly match.

The toughest aspect of being a tennis player is the lack of financial support. The most I enjoy about tennis is working hard mentally and physically, and it keeps me happy.

There always a time where you get mentally disappeared when you continuously keep losing and it influenced your game. You become angry, frustrated and impatient. So, I think that’s where I need to work on it.

If you could list three major influences in your tennis career, what three would that be?

1) My parents, the way they supported me and compromises their life for me, it was unviable.

2) Serena Williams, for managing to overcome every obstacle encountered with sheer strength and self-control.

To this point, what's been your best moment or favourite moment in tennis?

My favourite moment in tennis is when, I work really hard and I get the satisfaction, of that – ‘yes, I did it.’

What sacrifices did you find the hardest in order to pursue your tennis career, and would you say that tennis has changed you as a person?

Of course, tennis has changed me as a person, who I am today. My passion made me strong, independent. I travel alone and I don’t need anyone to cheer me up from the back of the court. But I do miss my family a lot, because I don’t get enough time to spend with them.

Now I m working more on my netplay, to be practice serve and volley or return and volley, like whenever I get any chance, I will get into the net.

What are your plans and goals for your life in tennis? How do you see your future in the sport? Do you plan to stay involved in tennis for many years?

I would like to play more and more tournaments and achieve the winning crown. I want to play in grand slams and Olympic Games and will live with my passion.

Now I just want to focused on my tennis carrier and wish to achieve more titles.