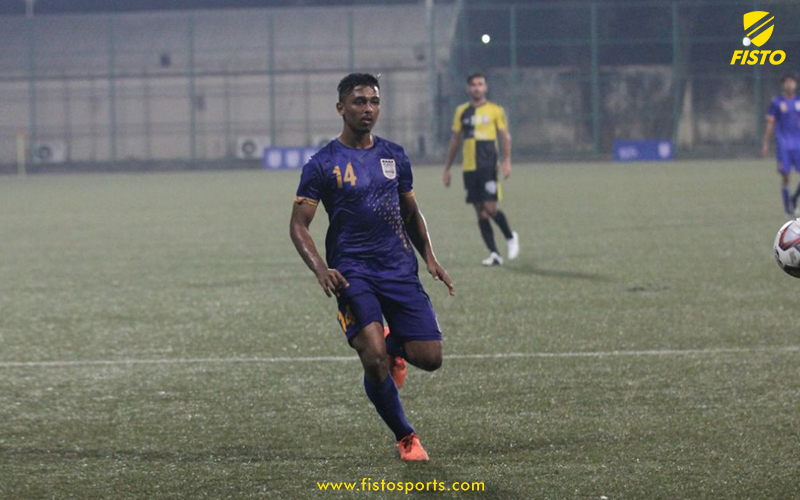 Abel Fernandes’ father was a professional football player and it was in Abel’s genes to follow his footsteps.

The player, who is most easily summed up as an attacking left-back, has football running in his blood with his father having played at the state level during the 90s.

The 19-year-old is a graduate of S.t Anne’s high school, where he excelled and subsequently progressed through its ranks before joining Mumbai Rush FC.

During his time at Mumbai Rush FC, Abel improved his in-game intelligence and developed skills such as scanning the pitch and squeezing his way out of pressure, as well as being adept at using both of his feet to dribble.

Abel also caught the eye in regional and national tournaments. In 2016, he was called up to the U-17 National Team camp. According to him, it was one of the best experiences he has ever had but unfortunately couldn’t make it to the National team owing to a severe knee injury.

It wasn’t long until Mumbai City FC recognised his potential and brought to join their youth ranks.

Abel has already featured for the under-18 in the U-18 I-League, and prompted to the Senior Reserve team in 2nd Senior Division I-League, and will be looking to keep adding to that tally for quite some time yet before he could swiftly take the next step into the senior team.

Abel’s achievements so far in his nascent, a recap:

All India U-19 championship winners with M.M.K college in 2018

Abel is a quick, agile and powerful defender who utilizes any and every opportunity to move forward into the opponent’s half.  His fast pace helps him in both defensive and offensive aspects of the game. He can cleverly use this play to intercept passes.

The Smt. M.M.K College of Commerce & Economics student also a good free-kick taker and his crossing too is superb. He finds a teammate with most of his crosses.

In order to make it to the senior side he will need to focus more on his match level fitness as well as becoming more of a well-rounded defensive footballer. Nonetheless, Abel looks likely to have a bright future.

First of all, how did it all start? Take us through your path to football.

I started playing football at the age of 6. My Dad, Nazareth Fernandes used to train me and he was a footballer as well. Watching my Dad play was always an inspiration with which the interest of me playing rouse. It is definitely something that I take pride in, considering how good my father was. It is no cliché when they say football is in your blood and I cherish that.

My parents have been a huge support system throughout my career. Football has been a huge part of my life. I started playing for my school team at the age of 7 in the U-8 category. Also won the u-10 and U-14 Championships at Mumbai school level.

In 2014, I was scouted for the U-15 I-league team (Mumbai Rush FC) and I played for the team for 3 seasons and also captained it for 2 seasons. Mumbai Rush family was a turnaround point in my career. The club had been really nice to me, especially coach George Lawrence.

Later in 2016, I was called up to the U-17 National Team camp. It was one of the best experiences I ever had but unfortunately couldn’t make it to the National team because of a severe knee injury. I also won the Best Defender award of Mumbai in 2016. After that, I went on to represent the U-17 Mumbai district team where we won the State Championship at Palghar district. After that, I was called up to the U-17 Maharashtra State team where I represented the State at a National Championship in Himachal Pradesh. From there I was scouted for the Indian super league side (Mumbai City FC) where I played for the U-18 team in the U-18 I-league. The next season after this, I was promoted to the Senior Reserve team that played the 2nd Div Senior I-league. It was a great experience competing with teams who had foreigners and experienced players travelling all over the country.

Mumbai City FC has really been amazing in my development as a player and also as a person, especially my coach Mohan Dass helped and guided me a lot. All my coaches have played an important role in the person I am today. I would also like to say that without God I am nothing, it is all his will that I have reached so far in life.

I always idolized my Dad ever since I started playing. My Dad was a footballer as well so I always looked up to him. My Dad has always inspired me through my career as a Footballer.

I am an aggressive player. My attitude on the ground is always the same may it be a big game or a small game. The attitude towards the game is what determines the character of the player, this what I strongly believe in.

Football is my life. My feeling towards football can’t be expressed in words it is much beyond that. It is a different feeling altogether. Every day is a new experience for me where I get to learn and improve step by step.

When a person is passionate about something, that thing is like a life for him. We all know that you are extremely passionate about football. What are your feelings when you take the ball and go play?

Training every day and working hard is all I believe in. My passion and determination towards football is what drives me to train every day.

I either go for a jog and do a few stretches or visit my Physio who gives me the best advice.

What can you do on the pitch when you feel you aren’t in good form?

Every game is a big game for me. I try to give my hundred per cent in every game I play. I always pray and make the sign of the cross before every game.

What are some of the hardest lessons you have learned as a football player?

Football has taught me a lot. The never giving up attitude, confidence, consistency and hard work are the most important aspects that I learnt.

My first U-15 I-league match where we won and I scored 2 freekick goals.

Most embarrassing moment in football?

There weren’t any embarrassing moments as such but every mistake that I made, I learned from it and tried to Improve myself.

Playing for the National Team at the International level to make my parents and my country proud, is what I want to achieve in the years to come.