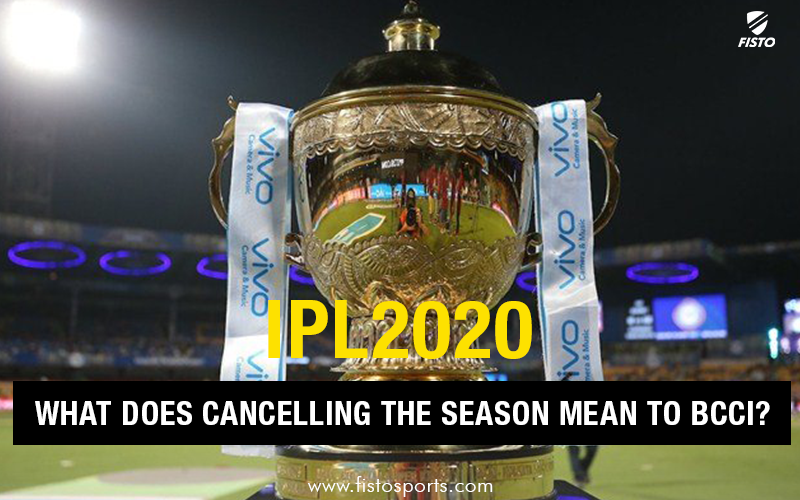 IPL 2020: Cancel, delay or behind closed doors - How much will it cost the BCCI?

With the coronavirus chaos escalating, the fears are also growing that the outbreak could see the IPL 2020 season canceled for the first time, and could cost BCCI a massive financial hit.

The virus that originated in a small city of China, has spread across 177 countries taking in 34,000 lives and is still proliferating with the  numbers escalating day after day leaving the entire world stranded at a pause, with nothing left to do rather than waiting and hoping it all ends soon.

With the playgrounds being a possible breeding ground of the infection and sports unarguably not being one amongst the quintessential things that rescues mankind from the global pandemic, which is of supreme significance at the moment, all the sporting events were put out one after one.

The India premier League, which was scheduled to take off on the 29th of March is put-off till the 15th of April. With a 21-day nationwide lockdown imposed by the Government, the BCCI is yet to take any call regarding the betiding of the event.

Taking the current situation into account, the BCCI will have to opt one amongst the options left which will be, resuming the tournament post mid April if things get better with the same number of games; truncating the tournament which will result in reduced matches and days; force majeure: an unforeseeable  event hindering the fulfillment of the contract.

With the Visas being suspended until the 15th of April there are a number of players who are to be flying in from other countries which will be another major issue for the BCCI.

The cash rich tournament pulls in a huge amount of money for the BCCI and each of the options will have an impact on the revenue generated with the cancelling incurring the heaviest loss.

Apart from BCCI and the franchises, the umpteen number of sponsors central and local, who shred their money to get their products to a number of people will also be under tremendous loss.

Here’s a detailed look of the loss that will be encountered on either of the options coming to play.

POSTPONEMNET OF THE LEAGUE WITH THE SAME NUMBER OF MATCHES

Though this is one of the least possible solution considering the worsening of the crisis day after day, this is the option in which the effects will be at the minimal or zero

Star India who are the broadcasters  and the central sponsors who sponsor for the IPL  account pool in 4000 Crores INR  to the BCC and they  will continue the same, as they will not be facing any loss and the sponsors will attain the reach which is their target.

The franchises will be receiving the fixed amount 250 Cr per franchise, from BCCI and the local sponsors and the players will also receive the amount they were auctioned for

The state associations will receive the fixed amount of 7Cr, i.e,  1 crore per game  which will be shared by the BCCI and the franchise.

The match officials and the other staffs responsible for the smooth functioning of the tournament will also be paid without any loss.

However, the postponement with the threat that will be followed after the resuming, will see a steep dip in the crowds thronging the stands, and it is expected to cost an amount of 4 crore per game.

A truncated version of the tournament will result in a ‘pro-rata’ renegotiation where the BCCI and its stakeholders will be facing a reduction in the pay according to the number of games being played.

The contacts holding the BCCI, the broadcasters and the central sponsors, event management companies, franchises and their local sponsors, the state associations, the players, match officials and the staffs will be renegotiated and laid on a ‘pro-rata’ basis that corresponds to the number of matches played which will result in a heavy loss for the BCCI as their revenue will be hit hard.

With the broadcasters already having sold 90% of their slots to advertising they will be facing a heavy loss on renegotiation and adding to it will be timings of the matches.

This will have a loss on everybody as nobody would get anything lucrative out of it. The broadcasters will have no games to televise and the sponsors won’t find their brands and they may probably not pay the 4000INR to the BCCI.

The franchises will not be paid and they may not pay the players the amount they were auctioned for and the match officials, staffs, the event management companies, the state associations will not be paid which will have a heavy loss on the BCCI and all of its stake holders.

There are a number of ongoing rumors regarding conducting the tournament closed doors. If this comes into play, the broadcasters and the various online streams will be on a high, with all the spectators thronging in front of the TV rather than stadiums as they will be forced to. The sponsors will have to vye in for the available slots on the television to get their brands reached. This will have a minimal loss for the BCCI as they can formulate other contracts to compensate the gate money.