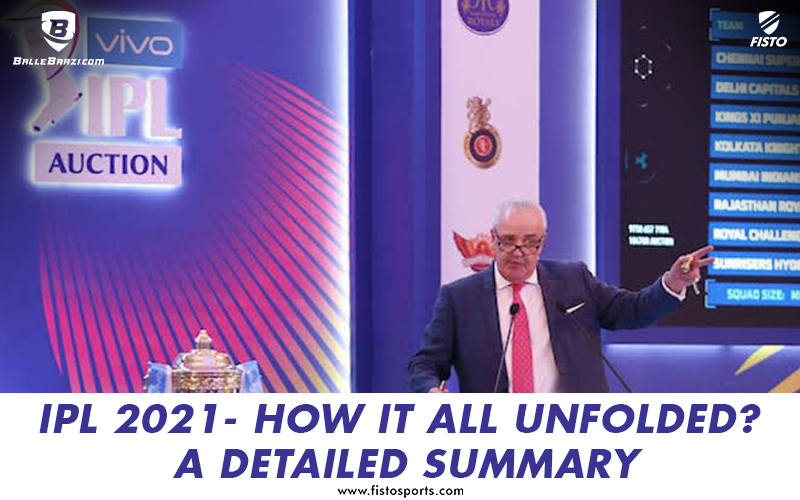 IPL 2021 faced many challenges and unanswered questions – not the least of which is what happens after the UAE leg is over.

For a little background, the COVID-19 situation in India was looking like under control. Lockdown was relaxed by the government and people started to live their routine life.

Taking all these into consideration, BCCI decided to host the 2021 version of IPL in India, which was shifted to UAE the previous year. With a lot of optimism, the fans were enthralled as it was decided that they may be allowed to watch the match from the stands in the later half of the tournament.

Here’s a comprehensive look at the unfolding of the tournament from the grand auction to postponement to shifting base to UAE and the challenges ahead.

20 Minutes to GO 😎🕰️
Are you all ready for the VIVO IPL 2021 Player Auction?
We cannot contain our excitement levels, can you 😃 #IPLAuction pic.twitter.com/AQLg3PtAtm

The space that determines the outlook of franchisesIPL 2021 auction took place in February. Teams churning data and video to form a formidable auction strategy. RCB went with all guns blazing for Glenn Maxwell and Kyle Jamieson in the end holding on to them. RR went big with Chris Morris, while CSK shrewdly grabbed Moeen Ali. The infection started to spread rapidly in March, with no restrictions in place.

BCCI asked players to stay in the bubble for a week before joining the team practice sessions. Multiple swab units were placed in the ground to monitor player’s health before the tournament, tests were done regularly to check for infections.

IPL 2021 started amidst a lot of strong voices and states opposing the tournament due to the pandemic situation. The cases in India almost doubled from the start of April, with leaders prioritizing election rallies and religious gatherings over the pandemic control.

There was a wide debate regarding the necessity of IPL in such torrid times, but IPL games recorded good viewership numbers from the start. It was slated as the lifeline for people working down the ladder, while the one on the pyramid earns huge cheques.

Another change BCCI introduced was to scrape the home games concept and shuffled down the games to multiple venues for a franchise to reduce the venues. Safety was the main factor with players advised to follow strict protocols.

Mumbai Indians took on RCB in the opening encounter losing out narrowly and continue the trend of losing out the opening game. On the other hand, RCB gaining momentum from the win went on to register a string of victories.

CSK the dad’s army proved who the real dad is as they bought back the vintage CSK, especially the superhuman Jaddu exhibiting his mastery in all the departments. KKR and SRH had a horrible start, languishing at the bottom of the table. PBKS and RR trying out different combinations couldn’t find out the right combination to win games.

Some teams struggled initially to adapt to different conditions from their home turf. COVID-19 situation in the franchises was kept in control, but the national cases kept raising.

IPL was touted as a medium for people to ease their pressure. A lot of foreign players started to fly out due to the fear of contracting the virus. Players like Adam Zampa and Kane Richardson flew back due to the rapid pandemic outbreak.

UPDATE: The Indian Premier League Governing Council (IPL GC) and Board of Control for Cricket in India (BCCI) in an emergency meeting has unanimously decided to postpone IPL 2021 season with immediate effect.

Wicket-keeper batsmen Saha set to open against RR felt a little under the weather and his tests came back positive. Erstwhile CSK’s bowling coach Balaji and KKR’s players Varun Chakravarthy and Sandeep Warrier suffered the same results. This forced BCCI to cancel several games at the start, but due to the pressure from other boards, BCCI postponed the IPL without notice.

Franchises took the responsibility on themselves to safely transport foreign players. Australian players were transported to the Maldives for a 14-day quarantine. England players were transferred back to bio-bubble in England, while Bangla and West-Indies players were taken to their homes in separate charted flights. BCCI was in discussion with ECB and UAE to host the remaining tournament, with UAE finally being selected as the venue. But the road ahead is tough for BCCI as there are a lot of hurdles to jump to reach the baseline.

The major problem would be the logistics of transporting resources and the players, especially now as the new variant is spreading around the world. World Cup t20 slated to be moved from India to UAE, and this created an extra load on ICC to maintain the quality of pitches as the pitches would detoriate over time.

With more than 70 games to be played in a short window, pitch maintenance is a key factor. CPL scheduled to be conducted in August- September would hamper the chances of WI players to play in IPL.

A lot of international games are being played at the same window as IPL and this would create conflict for many star players to represent their franchises. So it would be interesting to see how much online crowd could IPL pull, amidst its heavy investments.