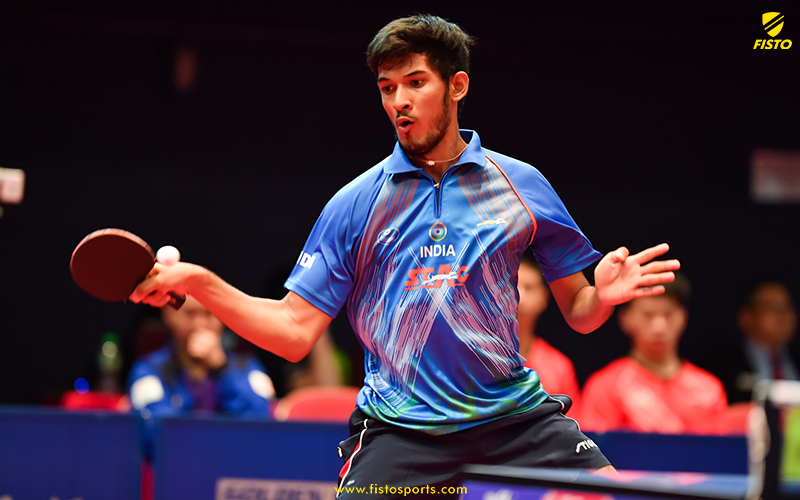 Luckily for Ishaan Hingorani, he has what many other young TT players do not: a father who is not only an ex-professional but also arguably one of the most supportive and sensible parents on the planet.

The TT stock is strong in the Hingorani family.

After his father’s escapades in the '90s, Ishaan Hingorani Is forging his own career path.

Ishaan’s childhood was his earliest foray in the world of Table Tennis. His father, Mahesh Hingorani, was a former National TT player, was, undoubtedly, a great influence in his upbringing.

His early youth career mainly consisted of him flirting with various coaches, moving around as he couldn’t find practice partners at his place. Much of his early development occurred playing under every coach in Gujarat, where he further sharpened his TT skills, with healthy competition provided to him by his father, while drawing inspiration from the famous Xu Xin.

The New LJ commerce college, Ahmedabad, student form over the years has been excellent, chalking up titles, including two gold in junior boys team and boys singles consolation event at World junior circuit Serbian open, Belgrade, 2017; silver in youth doubles and junior doubles at the junior and Youth national and interstate championship, Kolkata, 2018; and silver in men’s doubles and bronze in men’s team event at the Senior nationals and interstate championship, Telangana, 2020.

The Gujarat teenager has maturity, composure and calmness way beyond his tender years, and is way ahead of his time. He is tall and reads situations very well; he is quick and often cuts out the situation before it arises. He is an attacking-minded player that coupled with an incredible forehand to go with it, which is essential in attacking style that focuses on pace and transitions.

Ishaan uses these attributes of his very well while going forward, and charging at the opposition. He loves to attack, and that is his primary strength.

His energetic performances have definitely put him in the spotlight, but he’s got a long way to go if he is to establish his name in the game.

How did TT happen? Did you play any other sports growing up? And how would you define your journey till now?

I used to play badminton when I was 6 years old. Then my father introduced me to table tennis as he was a national player in TT. It's no cliché when they say it's in your blood and I cherish that.

In the beginning, I was just playing for fun, but I was learning too quick and winning district tournaments made me serious for the sport. The journey was quite difficult for me as I can't find practice partners at my place. So, I used to travel a lot for practice, mostly I have played under every coach in Gujarat and I am very much thankful for all the support I got.

Who was your favourite player growing up? They’re probably still playing.

What makes table tennis so attractive to you?

Table tennis is considered to be the second-fastest sport, timing of reflexes are in milliseconds and it's a very difficult sport to learn.

My school and my college have supported me a lot to cope up with studies. And personally, I find it comfortable to focus one thing at a time so when tournaments are there my focus is only on my game and during exams, the focus is only on studies.

If you are a relatively calm and quiet player. Do you think this beneficial to your game? Does it bother you when your opponent is very loud and vis-à-vis?

I am definitely not a quiet player but trying to be. I think being calm can be beneficial but it depends on the player. Sometimes when your opponent is loud it gets a little bit tricky to concentrate. Whereas being loud by yourself can also be beneficial. Sometimes being loud really boost ups your spirit, confidence gets on the peak.

Self-talk and positive thoughts are mostly done by me, sometimes I would just take a small break to analyse.

Forehand for sure. Because from childhood I have played forehand the most in comparison to others.

What is the most embarrassing thing that has happened to you on and off-court?

There was one incident on the court, during a rally I played some good counter-attacks and I tried to finish the ball with a fast forehand drive and the opponent was not ready for that and I yelled 'cho' (yes c’mon) and there was no chance of ball coming back but then opponent got misconnect with his racket and ball came back touching net then the edge of the table.

How much of a mental aspect involved in table tennis?

A ton of mental aspect is involved in table tennis. What to serve? How to receive? How the next ball will come? I have seen players down by 4-10, 2-10 even 0-10 during final sets and then convert that to winning.

What goes through your mind when you have just lost a point?

Well, I just try to pump up myself by thinking positive and focus on the next point.

How supportive is your school/college when it comes to TT and other sports?

When it comes to attendance or internal exams or anything my school Kendriya Vidyalaya IFFCO Gandhidham and New LJ college of commerce has supported me throughout the time.

I think during state tournament I have played longest rally maybe 25+ shots against Harshil Kothari.

Do you have a favourite wins?

There are few victories that are special and If I have to pick one that would be against Parth Virmani. He was in top 3 during that time and I won 3-2 in the second round. I was 8-10 down in the final set and then I won 13-11. And that time I was seedless.

Many people see Table tennis as an “easy sport”, what do you have to say about that?

Table tennis is as difficult as any other sports. It requires a lot of physical and mental aspect. It's just that people can't actually see or feel the spin. There are lots of spin. And the play can be affected by types of balls, size of the stadium, air conditioning, weather, flooring and there are different rubbers which have different speed, spin, control that just make table tennis more complex and difficult.

What can we look forward to seeing from you in the distant future?

Imagine that you are fighting for the gold at the upcoming Olympics Games. If you could get anyone in the world, from the past or the present, to coach you for that match, who would it be? Why?

Ri Hyong Il (North Korea), he was my coach during 2016-2018. One of the best coaches so far. Because of him, only my game has reached some heights. And he knows how I play, what am I capable of and most of all I trust his instincts and tips.

Non-TT players, that you admire the most?

Which is your favourite social network?

What do you prefer: training or the end result?