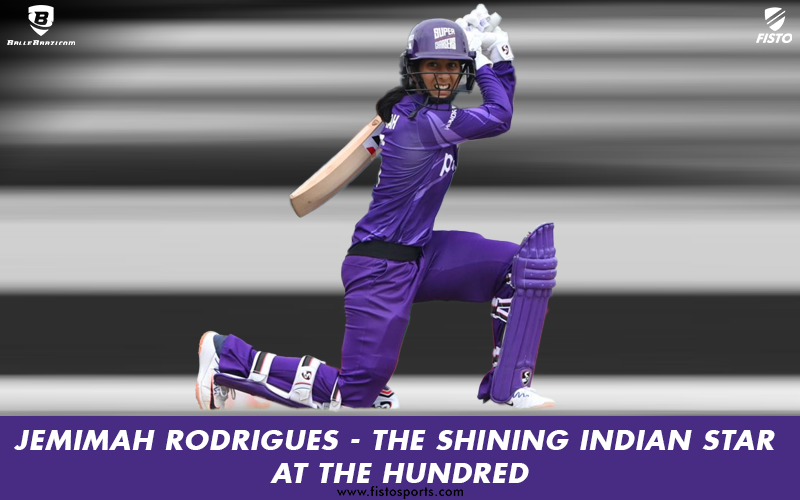 Jemimah Rodrigues, India’s star batter, is in sublime form in the Hundred.

Representing the Northern Superchargers, she burst into the tournament with a fiery knock of 92 of just 43 balls with 17 boundaries and 1 six.

This astounding knock of Jemimah allowed Superchargers to chase down a target of 131 in just 85 balls.

The best part about this knock was her counter-attacking approach when her team was almost down and out.

Superchargers were reduced to 19 for 4 after 18 balls by the Welsh Fire. Her fiery knock put superchargers in the driver’s seat and eventually allowed them to win the game comfortably.

She didn’t stop here and got a fifty in the second game as well against the Trent Rockets. This helped her team to get their second successive win.

The Indian Star top-scored for her team with a 41-ball 60 including 10 boundaries.

She’s now the leading scorer in the tournament piling 152 runs in just the first week.

Jemimah has also got the most number of votes for a favourite player in The Hundred app.

England’s legendary batsman Kevin Pietersen was in all awe for Jemimah and tweeted: ‘Jemimah Rodrigues is now my favourite player’.

If she could continue to deliver in the tournament just as she has done in the first two games for the Superchargers, she’ll definitely earn a lot of fans and praise from the legends of the game.

However, before the Hundred, things were not in favour of Jemimah Rodrigues.

She had a terrible outing against England in the recently concluded series.

Her performance was not good either against South Africa in the series hosted by India.

She was dropped from the team in both the series but has bounced back really well in the Hundred.

Now, she has also become the first Indian cricketer to score a half-century in the Hundred format.

Jemimah Rodrigues always possessed immense potential. She started playing Under-19 cricket when she was just 13 and played for her state at the age of 15.

Her recent failure at the international level did disappoint her fans, but she has come back really strong and has literally lit up the tournament and is now getting all the fame she deserves.

Whoever watches her playing understands the class she has, she’s a typical Mumbai player with almost all the shots in her bag.

She represents the modern explosive brand of power-hitting and is a key young batswoman that the Indian Team is looking up to the bigger challenges in the future.

Jemimah idolises Sachin Tendulkar and is a fan of Rohit Sharma, and has got all the classy shots mentioned in books of cricket just like Sachin and Rohit have.

This makes things really tough for any opponent bowler to plan against her.

Jemimah, with the kind of shots she plays, has a bright future ahead of her. Team India will like to play her alongside Shafali Verma to get quickfire starts in the T20 format.

The hundred formats was invented to attract younger and more diverse crowds to watch cricket, and she’s definitely serving that purpose.

While there’s no Women’s IPL in India yet, the hundred can be really crucial for Indian Women cricketers.

This format can be very helpful for the players to learn pressure handling as the format is quite intense.

Not only Jemimah, but other Indian players like Smriti Mandhana, Harmanpreet Kaur, Shafali Verma and Deepti Sharma will get to learn a lot about how to respond in pressure situations.

This will definitely improve the way team responds to Knock-Out games.