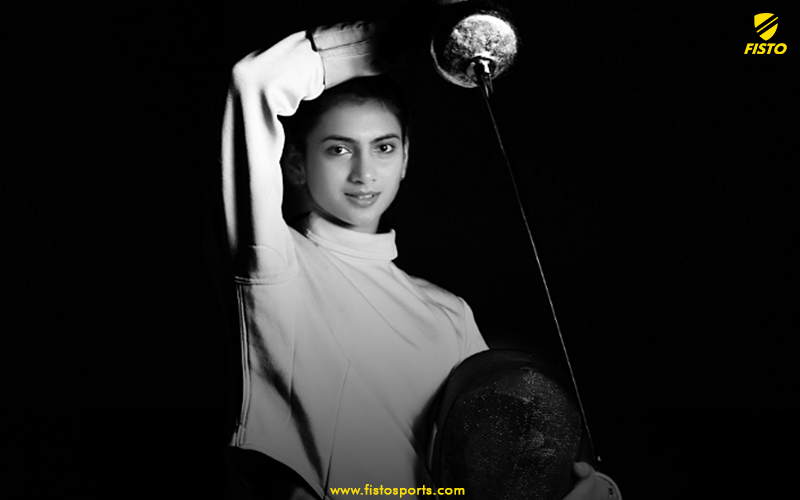 Despite being a beautiful hilly state, Himachal Pradesh never fails to produce talented youngsters, and Jyotika Dutta – who is plying her trade in an ancient niche sport, that is fencing – can certainly be added to that impressive list.

As you can see, from a young age Jyotika had a rare knack for the game of fencing. Now, after years of experience and an unmatchable work ethic, Jyotika has just begun to scratch the surface of her fencing, making multiple Cadet and Junior National Team and winning a fair share of medals along the way, including Junior Commonwealth Championship (silver medal), Asian games 2018 (6th rank), Senior Commonwealth (5th rank), Junior National (1 gold 1 silver), Youth National (2 gold), Senior National (1 gold 1 silver 4 bronze), and Federation Cup (gold).

The extent of Jyotika’s talent was showcased at the 2020 Khelo India University Games , when she captured the gold medal in épée event, and proving again and again why she’s highly touted talent in the country.

The épée specialist is one of the few fencers in the country have impeccable point control, quick toe touches, and coordinated footwork.

It is imperative that Jyotika looks forward towards the boundless opportunities in the future, but at this stage, playing many tournaments and keeping the consistency is paramount. Time is on her hands: that should afford her chances to establish herself in the big games.

Below, the 23-year-old from Guru Nanak Dev University, Amritsar, explains in her own words how the sport changed her life, how she trains, and what she has planned for the future.

How did you first get into fencing because it’s a pretty unique sport? What are your first memories about the time when you knew this would be something you pursued?

My cousin used to fence for his University in Patiala. He introduced me to this exciting sport. As I am from Himachal Pradesh, fencing is not so popular sports over there and there is no training centre for fencing either, so in 2010 I went to Patiala for SAI trials and got selected. Needless to say, I was hooked. I had no idea what the was or that it would take over my life. I fell in love with it immediately. When I gave continuance good performance in competitions, I was sure to continue fencing for a long time.

At what point did it sink in that you could be really good at Fencing?

When I got Selected for my 1st International competition under-17 Asian Championship in 2012 that was the time then I felt I'm good at it. Also, fencing is a fantastic sport. No other sport has the same mix of speed, strategy, technique, agility and excitement as fencing.

Who were your fencing idols when you first became interested in the sport? What was is about their character or achievements that you admired?

Yana Shemyakina from Ukraine was my fencing idol. She was the Olympic champion in 2012. I like her playing style and aggression while competing.

Actually, I don’t live with my parents. They were never really present in my competitions, but always supported and motivated me on calls.

My father has been always an inspiration to me. He was also a sportsperson for some reason he couldn’t continue his sports career.

My coach Mohit Ashwani has been a constant guide from the beginning of my career. He supported me and helped me to settle in Patiala to get undergo training in NIS. He has been incredibly supportive and helpful throughout my fencing journey. He pushed me to continue working hard and made me a better player.

No, everyone faces one or the other issue in life but I have not faced any such major issue yet. I hope I don’t face such resistance in future as well. I don't want anything to hinder my progress.

And I love playing the game. For me, it is also an area of my life where I feel I can really push myself. I really believe the sky is the limit for what I can make myself in this sport and that by pouring my heart and soul into it can make me one of the absolute best at it. That feeling is pretty great. I have also made a ton of great friends in the sport over the years and those people have helped push me to make myself better over the years and dedicate more of myself to improving my fencing.

The point that I am able to overcome my fears through fencing.

Among the three which is your favorite – foil, épée, and sabre?

Owning fencing tools are like owning a knight suit. A heavy armour with a powerful sword. Fencing suit gives me a feeling of power and set me in the discipline. The only challenge is to wear it in summers.

Fencing has given me so many memories to cherish but the most memorable moment of all was winning the silver medal in my first Junior Commonwealth Championship. I lost to England in the finals but that defeat taught me a lot and continued to improve my game.

I would prefer bronze medal at the Olympics. Because Olympics is the biggest platform for every sports person and fencing is not part of Commonwealth games.

What’s the most random/funny thing you’ve ever done in fencing during training?

This is a funny one, I got hurt near my neck while fencing a bout, so I felt like puking, the bout had to be stopped as I was feeling too nauseated.

Every day I am excited to keep pushing myself to be better. I honestly sometimes feel like I haven’t even started yet. However, to be precise it’s to win a medal for India in Olympics and world championships.

My medals are all kept: Hanging on the wall of my living room.

If you could fence with any celebrity, who would that be and why?

P.V. Sindhu and Jacqueline Fernandez. I think they can fence really good and I like them.

What are the top 3 things on your bucket list of things that you would like to do in your lifetime?

To win a Olympic medal.

Spend a week camping off the grid.

A movie that you watched more than 10 times?

None, I can’t watch the same movie more than one or two times.

What’s something that ton of people are obsessed with but you don’t get the point of?

Overthinking. I use to do the same but now I realised that it just stress.