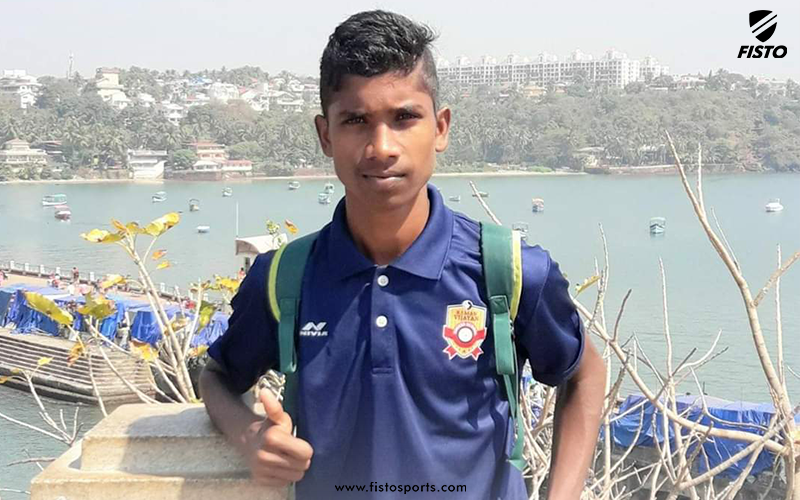 An 18-year-old star in the making, Kamalesh recently moved to Bengaluru FC reserve team where he will continue his development.

Originally schooled at Chennai famed Raman Vijayan Soccer School (RVSS), Kamalesh has risen through the ranks and impressed them all which drew the attention of the Bengaluru based club.

As a young kid growing up in Iyyampalayam from Dindigul, Kamalesh knew he only ever wanted to do one thing: become a professional footballer.

Kamalesh’s dream became a reality far quicker than anyone really expected, when he was picked up by RVSS and shifted to Chennai to be part of the academy and then he never looked back.

Kamalesh is capable of playing anywhere in midfield, has all the assets needed to move further up the pitch. His ability to play on the left wing and also as a creative midfielder has caught attention of many coaches.

He received plaudits for his superlative performances in the RFYS and AIFF Elite League.

Signing for Bengaluru FC reserve side is that this is just the very beginning of what we're going to see from him.

We caught up with the versatile midfielder to talk about his journey so far, his playing style, favorite player growing up influenced him most, his ultimate goal and more in the interview.

I am Kamalesh from a village named Iyyampalayam from Dindigul district and I always had an interest from childhood on football and I would say by nature I got into the game and there’s no any specific reason.

A player I have always admired is Ronaldinho. He had such class that he could transfix you. He was entertaining because first and foremeost he had fun when he was playing. He was truly a magician with the ball at his feet.

Tell us a bit about where you are studying, the support from the school/ college and how well you able to manage both – as playing football competitively must have been quite challenging? How did and are you coping?

I am studying 12th standard in JJ Government Higher secondary school, Sriperumbudur and my school has been helping me a lot in my academics and they have always arranged a special tuition for football students, so because of it I can manage both studies and sports and I am not a top ranked student and neither a poor student and I am an average student. Raman Vijayan sir and RVSS played a huge role in your footballing career. Tell us a bit about his influence he has made on your life – both on/off the pitch?

I joined Raman sir's academy when I completed my 10th standard and from then on, they have taken care of me and provided great support and opportunities to develop as a human and footballer because in here they would always want us to concentrate on both football and education. You can’t join here only for football and Raman sir always believes that a basic education is a must for all and that principle not only helped me but all the players who is and was part of RVSS and NFA.

I can play as a left winger and an attacking midfielder and I like assisting goals and I would like to describe myself as the Goal creator or Assist maker. I just focus on putting the ball in the right place.

What drives you to get up and go training every day?

I have to travel 10 kms for ground during my starting stages and by blind interest I would travel to play football and from there to now, it's always the same blind will (playing football) that helps me to get up and play.

Read: The Making of Ajith Kumar: Learning Patience And Proving His Doubters Wrong One Challenge At A Time

Which school is your biggest rival team and do you have any memorable moment against them? If yes, explain.

There’s no such rival school team but in terms of professional teams there’s two Chennaiyin FC and BFC (before) and I has a two memorable goal against both the teams; a free-kick goal against CFC in last year’s elite league opening game and a long range strike against BFC in this year elite league game.

What’s your favourite hobby away from football? Is there something you do to take your mind off playing?

My favourite hobby other than playing football is chess and I would love to play it during my free times.

Is there any particular memories from your football career so far that stand out as being special to you?

The free-kick against CFC last year will always be a special one.

Phrase you overuse the most during a game?

Is there a particular formation you feel comfortable playing or that you would say lends itself more to your game?

4-3-3 has been my favourite because it helps me to attack more which is my natural game.

My favourite pair of football boot is Nike boots and the one I am currently using is Adidas Nemeziz.

I would love to play for our National team and that has been my ultimate dream.