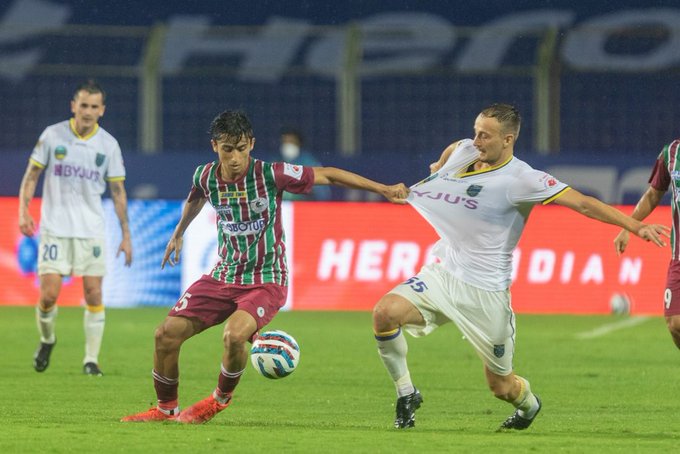 The contagious smile, penetrating stare and determined look on his boyish 20-year-old face resemble the features of his famous father, Jamshid Nassiri, who was a household name in Kolkata and an established East Bengal legend and Kiyan Nassiri has come to ATK Mohun Bagan to prove one thing -- that he, too, can play Football.

Jamshid initially an Iranian national came to India and found a home on the football field. One of the most expensive foreign players in Indian football at the time, he was a prolific goalscorer and his partnership with Majid Bishkar is fondly remembered to date.

It's hard for Kiyan not to love the game, growing up on the sidelines next to his Dad and it didn’t take him long to get on the pitch.

“I have loved the sport of football since I was young and have played football at every given opportunity. Till the age of 11, I would play anywhere I was given the chance,” Kiyan told indiansuperleague.com in an exclusive interview.

He played the junior I-League for Mohammedan Sporting at the age of 16 before making it to the senior level in the Calcutta Football League. He was then picked into the Mohun Bagan U-19 team before being selected in the senior team for the 2019-20 I-League campaign.

Kiyan recalls how his father played an important role in his journey.

“My family and my father played a huge role in pushing me to be a professional and playing football at a very early age. He has always been very supportive and at a young age there was a blur in the lines between being a coach and a father but everything always ended up with a pat on the back,” said the 21-year-old.

On Saturday, Kiyan is set to get the first taste of the derby in the Hero Indian Super league (ISL) as ATK Mohun Bagan take on SC East Bengal but he knows all about it from his father’s experience.

“I have heard about it. I have been told how intense and how exciting it was to play in the derby and my father always looked forward to these matches,” Kiyan said.

But his recollection of his father’s derbies remain in the form of stories.

“I have not got a chance to get hold of any footage. I have heard stories from various people and my father’s friends about the games back then so it makes me wonder how games were back then,” he said.

Kiyan came on as a substitute in ATK Mohun Bagan’s 4-2 win over Kerala Blasters in their Hero ISL season opener and is ready to be called upon if his team needs him in the big derby on Saturday.

“I am ready to be part of the team and on the field whenever called upon not only for the derby but for any match at any point. This is what we train for to be always ready to give our best whatever the opposition,” he said.

Asked if there were mixed feelings at home that he was representing ATK Mohun Bagan, the arch-rivals of the team his father Jamshid so proudly represented, Kiyan revealed that wasn’t the case.

“Everyone at home was very happy when I joined ATK Mohun Bagan. For them it was like all the hard work and sacrifice that they as well as I had put in over the last few years was finally paying off so this was the most important thing,” he said.

The Nassiri household may or may not be split on Saturday, but the city of Kolkata will certainly be either Red and Gold or Maroon and Green.

As for Kiyan, the son of an East Bengal legend, it will be all about following in his father’s footsteps, but for ATK Mohun Bagan.