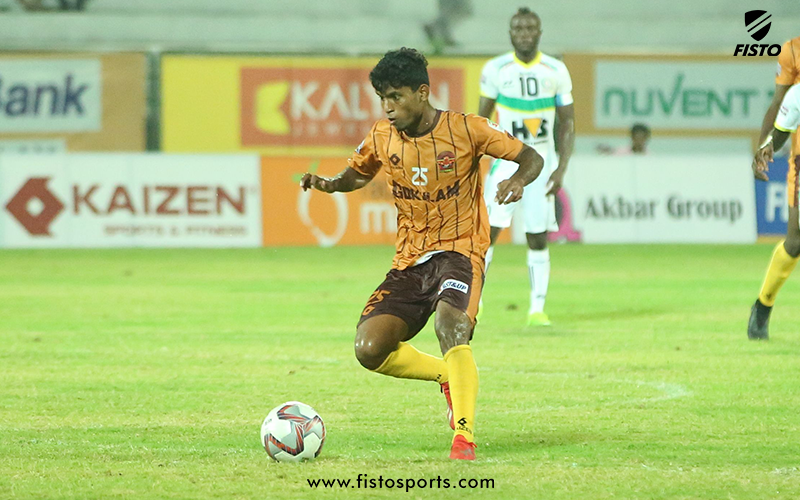 The 24-year-old has found his rightful place in Gokulam Kerala FC, and he is producing the goods.

Coming from a small village in Muthukulathoor from Ramanathapuram district, Mayakannan has been an inspiration for many. Dearth of resources during his early struggle days, but with no dearth talent, Mayakannan proved what one can achieve with a firm resilience and determination.

Now, he is relishing role as Gokulam’s steering wheel

The 24-year-old midfield pivot has made it through the ranks of the Noble FA. However, it was his 2016/17 season with CFA Senior Division League that created the backdrop of his arrival to Gokulam, with the I-League club ready to offer him a contract in 2018.

In the 2018-19 season, Mayakkannan a part of the ‘B’ team but his impressive quality and repertoire of prowess prompted the manager Fernando Santiago Varela to promote him to the main squad in the following season. He went on to feature nine times in the I-League before it drew to an early close owing to the COVID-19 pandemic.

The more you watch him though, the more you realise Mayakannan has more to his game.

Impressing with his accurate passing and tenacious defending, he has now become a regular starter for the club. But eminently the strides he has made in recent times could assure one that he is set to climb greater heights in the future.

In the interview, Mayakannan talks about his career to-date and his future career goals.

Maya, you have come a long way from being a squad player in Noble FA academy to play regular football for one of top club in the nation that is Gokulam Kerala – How would you define your journey till now?

I have gained many experience from noble academy. When I was studying in noble academy. I didn't think about I-league. I just tried to learn a lot and always my next goal is to win the next match and I'm always hungry to win. That's automatically took me up to the I league.

In fact, you began your football career at the Noble FA academy. How did you get into the youth setup? And who helped you the most during your formative years?

Before my family moved to Karaikudi we were living in my native village near Muthukulathoor till my 6th grade and after moving here (Karaikudi) I saw some group of boys playing football and before that I don't have any knowledge about football then I started to play. And then I tried to get the chance in NFA and that time my brother and some of our classmates were selected for NFA. They gave instructions to start my career successfully and I followed it up by getting selected in the next trails of NFA and from then on it’s all because of NFA. Can you share some light over the role of Raman Vijayan Sir in your development in terms of his mentoring and coaching and working with him on a daily basis?

Before I joined Noble Academy, I don't know how to play football professionally. After I joined the academy Raman sir carved me. He is always being friendly to all the players. Raman sir easily find out the players talent. He sees our face and predict our problems. I am very much inspired of his football journey and his experiences and he always gave us the ultimate confidence to perform at our best in every match.

What is the role of your parents play in shaping your football career?

My parents always shown love towards me. They don’t follow football or have football knowledge. But they always allowed to me play football and they always gave their best to me.

How do you balance academics and football? Is this difficult? And how supportive your college and staff helping you in your sporting endeavors?

Yes, absolutely it is very difficult. But I've never found it hard because my college was very supportive to me, and always gave me the permission for go to the league matches at Chennai. College staffs (Subject staffs) was also very supportive to me and helped me in clearing my exams. And my college always had a good sports culture.

Defensive aspect is the best strength of me. It’s been two years since you joined Gokulam Kerala, first season you were playing for the B team and this season you promoted to the main team and played quite a few matches before Corona happened. How does feel to play for the club and the fan culture as well there has always been pretty scenic. Tell us a bit about Gokulam journey and the transformation within yourself and the beautiful game?

When I joined Gokulam Kerala FC, I saw the fans culture and fans are always being nice and support to us and it didn’t change irrespective of the results whether when we won or lost the match. I am very much impressed to see the fans culture. They are really very emotionally attached to the football and I can see that through their passion. Talking about my journey here, first year I got a chance to play KPL. I was very eager to perform in the KPL. Because I want to play the I-league. Next year, I got the chance for senior team. And my coach was very supportive and friendly to me. It was under the guidance of the coach I got my first chance to play and that too in Durand Cup and then I played I league matches. I gave my best whenever I played. But unfortunately, this pandemic happened. But I learned a lot from Gokulam.

Read: Kamalesh – the bright and versatile midfielder enamored by assists more than goals

How has your experience been under Coach Fernando Santiago Varela considering the fact that you have grown a lot under his influence/guidance particularly in the midfield?

I definitely learned a lot from Santiago coach. He is a good human being. Apart from the ground he is being friendly to all the players. He treats all the players like same. He gives the chance according to the players performance only. I learned, what to do before the match, and after the match from him. Especially in midfield position, I learned from him, during the game, when we need do defend the ball, and when we need do push the opponents during the game.

Is there one moment in your playing career that brings a smile to your face?

What is your go-to play or turn or skill?

There’s no specific go-to turnskill but shielding and intercepting are my forte.

Do you have any superstitions or lucky rituals you do before matches?

I do pray well before the match that's all. And finally, one personal goal you are looking forward to in a next couple of years?

In my next two years, I want to wear the team India jersey.

I’m not fond of any TV series but I always love to watch Vadivelu comedy...

For Donating blood and through which we can save many lives. It makes me very proud about myself. Maybe I can get the award for this activity.

We now know the differences footballistically speaking between the Premier League and La Liga, but which is your favorite league?

Both league is the best. And my favourite is Premier league.

If you could play alongside any midfielder from past or present week-in-week-out, who would that be?