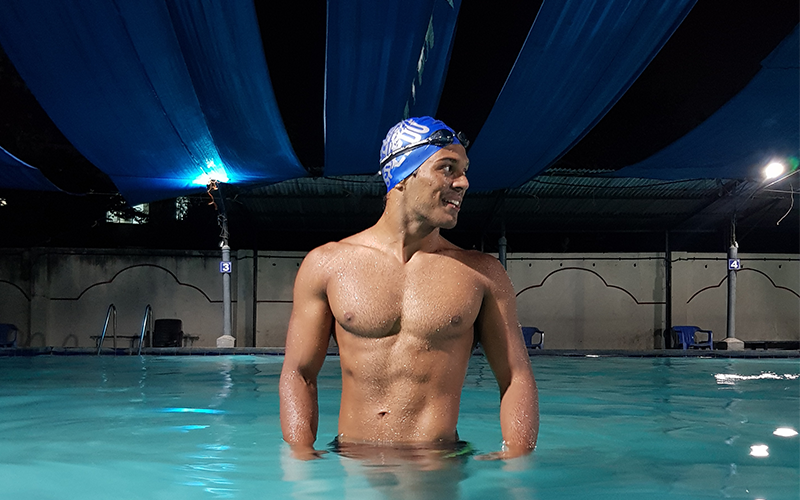 At just 20, Mihir Ambre is one of the most superbly talented swimmers in Indian swimming right now and it is not hard to see why.

As with many young talented swimmers, the fleeting career of Mihir Ambre has, so far, been a whirlwind of progress. He started swimming at the age of 10 and his first national medal came when he was 12 years old and his individual national medal at 14 (gold) and has till date won 15 international medals, and over 400 national, state and district medals and 30 best swimmer trophies.

A punchy, explosive butterfly swimmer with a fast finish, he burst onto the scene in 2016, winning 3 gold and 2 silver in the South Asian Aquatic Championship at Colomo, Sri Lanka. In the early 2017, he captured a silver medal in 100m butterflies at the World School Swimming Championship held at Budapest, Hungary, and till date, he is the only Indian to get a medal in this competition. Later in 2017, he made a new record in 100m butterfly stroke smashing a decade-old record of Olympian Virdhawal Khade winning gold the medal at the National Aquatic Championship.

Despite his impressive CV, Mihir is not one to be satisfied with his performance. The drive to get better is his way of making sure he stays on top.

He is a student of Garware College of Commerce pursuing his Degree in International Business Management and is well-aware that his future has the potential to be special.

Mihir has all the attributes needed to succeed at a higher level. The 20-year-old continues to train assiduously with the hope of one day going to the Olympics. For now, though, he is focusing on coping with the irregularities with the hope of reaching the top.

What is your favourite stroke to swim and why?

I endear butterfly the most for racing as it requires a proper and efficient technique to acquire speed. Also, it is supposedly the tough stroke to learn as far as I have heard since I began and a stroke frenzied by people to watch too.

Swimming is an individual sport. Even though there are swim teams and relays, at the end of the day you are swimming in one lane and it is your body and movement that results in success or failure in the competition. What did you do to keep yourself motivated in this individual sport?

Although relays need coordination among the team members, it is all about your individual contribution in it that builds up the chances of victory. I love to race and improve the faults that might be a hindrance towards a better performance. These are the basic things that push me to try to perform better subsequently. And then being an individual sport, it all comes down to conquering the race.

How much training do you do in any day?

As a young swimmer growing up, what did you find was most difficult for you?

As I was unaware of this sport being such a huge part of my life and playing professionally, I didn’t find anything difficult as such as I was learning all that I could and implement it in training and races. Apart from that socializing took a big hit as most of the time was spent in workouts and training. And maintaining a balance between studies and the sport would sometimes get tedious in the early days.

It started when I was 10 and my mom used to take my sister to the pool because she loved to swim, so she had a thought that I should learn some basic too just on a safer side and can say with an intention as a tool to save myself in an emergency situation. To be honest, I used to be afraid and never liked getting into the water. So, after learning all the strokes in a year, I started liking racing to free up mind, get all the adrenaline gushed out and feel refreshed (and tired at the same time.. haha).

What is your favourite and least favourite training sessions?

I am fond of sprinting and short distance races, so that goes for training too. I like doing technical things, various speed drills, power sessions, short sets and sprints. The disliked are the long and aerobic sets although they are as much important.

One fellow Indian swimmer of your age you admire?

Nothing specific as there are many talented athletes are performing amazingly in various events.

Well, that wasn’t tough for me as I had a clear vision of what I want and a good grasping power. So, the training and workouts were as scheduled and the rest of the time I used to study and pursue other likings.

·        At University National, Punjab 1 Gold (50m butterfly). He and his swim mates boycotted the meet because of unfair results and partiality.

·        In July 2017, at the National Aquatic Championship, I made a new record in 100 m butterfly stroke smashing a decade-old record of Olympian Virdhawal Khade winning gold the medal. Over all in the nationals, I won 3 gold, 2 silver and 1 bronze.

·        In April 2017 he won a silver medal in 100 butterfly at the World School swimming Championship held in Budapest, Hungary. The only Indian to get a medal in this competition.

In the past year, most of the time is spent at Bangalore for training and occasionally at Pune (home).

How swimming has changed you?

It was all very swift and expeditious. Each year I have seen myself progress and, with each race, my confidence has grown. I enjoyed all the young years of swimming, the training and the energy at the tournaments, all the glamour and fame that it gave me. The sport has taught me various abilities (integrity, ethics and morals, disciplined approach, principled way of conduct etc) and helped in developing calm and composed character and manage things efficiently in life.

I would say the Singapore Nationals in 2017 where I clocked the “A” Qualifying Time for Youth Olympic Games and Youth Commonwealth Games. And the World School Games at Budapest, where I was the only member of the Indian Squad to get a medal (Silver in 100m Butterfly).

Who are instrumental in preparing you, training you and guiding your swimming career?

My mom, my coaches (Mr. Vinay Marathe & Mr. Nihar Ameen) as well as all the other assistants/trainers. Also, my friends who pushed me through my lows and were there at the celebratory moments.

Which swimmer’s journey do you find most inspiring?

What did you do to celebrate when you won the first Gold Medal?

Well, my first individual national’s gold was in 50m Butterfly in 2014 and it was a complete shocker for me and wasn’t anticipated by me which led to the instance that I had to check the position board thrice to just have complete assurance. And then it was just a relief of satisfaction that I made it, as I had seen many of the participants fighting their way for a medal and getting really disheartened if they didn’t and adding to the fact, I hadn’t ever thought of pursuing the sport professionally.

What are your future plans as far as swimming goes? Do you hope to continue training through your school/college years and beyond?

Yes, I just hope that everything goes well in coordination with less irregularities and continue performing at the big stages.

What is your guilty food pleasure?

All the sweets and delicacies