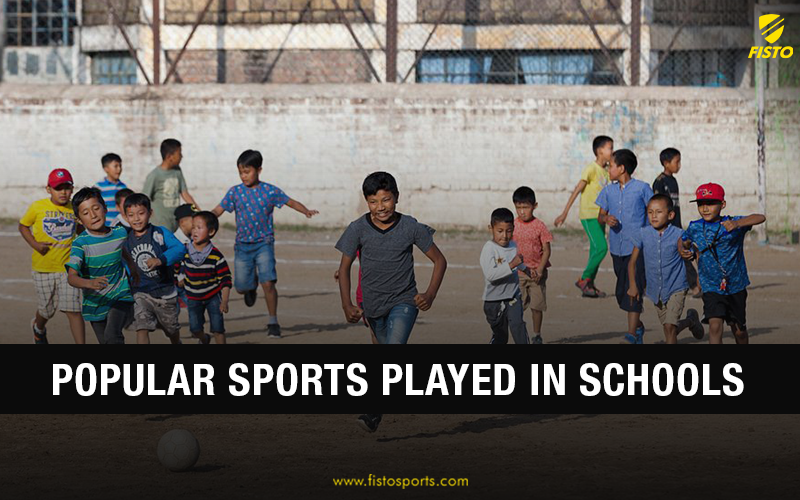 Most Popular Sports Played in India

Caulked with a number of playgrounds and courts for various sports, schools and colleges are always filled with a buzz of sporting activities. Apart from the fun factor associated, school grounds, has been a birth place of numerous sporting greats. It has provided a platform, for young stars to showcase their skills and associations to scout talents and mould them from a young age.

Federations such as SGFI (School Games Federation India), conduct tournament to enhance competitiveness and assure quality. While there are various sports, that are played competed and enjoyed here’s a list of the most popular sports in the schools.

Almost every human we come across in the country, young or old, will have a story of school cricket to pick reminiscence upon. No school popular in sport, goes without a team of cricket. Undoubtedly, the most popular sport of the Nation, is also one of the most popular and widely played sport in the schools. Flanked by a number of tournaments, the school team is most often seen in the ground practicing in the morning and the evenings.

Alike Cricket, football is another widely played sport in the schools. With football courts in most of the schools, the matches filled up with an essence of banter in the air are fun to watch as well. School football gains recognition to the players and has uplifted a number of players.

Baketball is a very popular sport in school  is the most favorite sport of Indian parents as the very sport connotes tallness for most of them. But for other obnoxious reasons, the sport stands out to be one of the popular sport in the schools.

Athletics is a very popular sport in the schools. some schools even  have synthetic tracks for athletes inside their campuses. School athletics has mothered a number of athletes and has been a forum for spotting them. 100M,200M, 400M, 800M, Shotput, Javelin throw, Long Jump, high jump are some of the events that are most popular at the school levels.

The six player sport set apart by a net is another popular in the school. While most of the schools do not have a Volleyball court, a net is hung up on the ground. There are many popular Volleyball tournaments that the schools partake in and it is widely played sport in schools.

With Badminton courts taking up every nook and corner of the country, the racket sport is one of the sport that is on a rapid growth in the country and undoubtedly one of the most played sport in the schools.

Table Tennis is one of the sport that is on the rise and in recent times with an increase in participation levels the sport has witnessed an escalation.  There has been a number of tournaments in schools featuring the sport.

The recent outburst of child Prodigies the sport has produced, is a proving example of the popularity of the sport at school levels. The sport has defined infrastructures at school levels linking tournaments that are played at the International level and is a widely played sport in schools.

Though not highly popular it is another sport, that is played at the school levels. There are a number of tournaments conducted through which talents are identified and recognized.