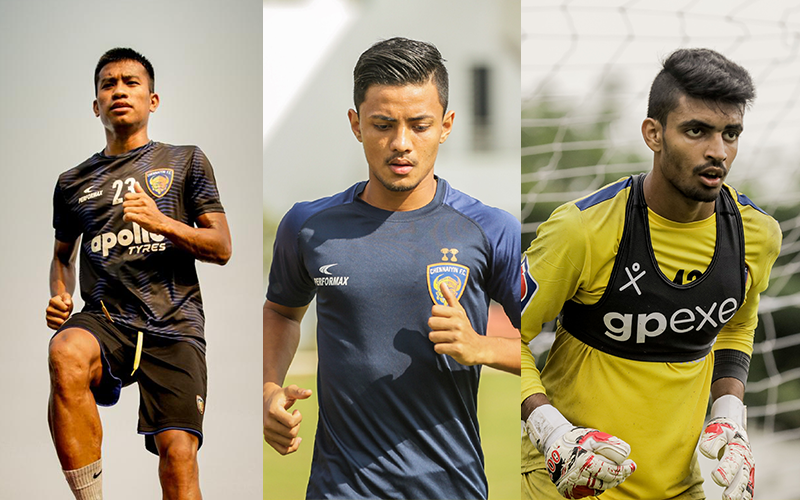 Chennaiyin FC, on Thursday, announced that they had handed new multi-year contracts to defender Remi Aimol, goalkeeper Samik Mitra and forward Aman Chetri, ahead of their 2020-2021 season.

The trio earning new contracts after impressing in the younger age groups and will be included in the 25-man CFC squad for the 2020-21 Indian Super League season.

While Samik and Aman are being promoted from the CFC B team to the first-team, Remi already has two senior CFC appearances to his name, one apiece in the ISL and AFC Cup.

This means CFC’s ISL roster will feature five developmental players (those born on or after January 1, 2000), with the trio joining forward Rahim Ali and midfielder Abhijit Sarkar who also meet the eligibility criteria. And as things stand, Chennaiyin’s Indian contingent for the upcoming ISL season comprises 12 players below the age of 25, underlining the club’s commitment to providing young domestic talents the platform to excel at Indian football’s biggest stage.

After training with the CFC first-team prior to the 2018-19 campaign, Remi Aimol had a loan spell at AIFF developmental side Indian Arrows in the I-League before returning to CFC and making his senior debut in the 3-2 AFC Cup win over Manang Marshyangdi in Nepal in June 2019.

“Being a part of Chennaiyin FC has been an amazing experience. The club has helped me improve and develop immensely. I have come to think of it as a second home and I take great pleasure in continuing for the seasons to come. I am ready to take on everything and will give my 100%,” said a determined Remi from his hometown of Chandel in Manipur.

A tenacious presence between the sticks, young custodian Samik Mitra impressed for the CFC U-18s and B team before earning loan spells at Indian Arrows over the last two campaigns.

“Chennaiyin has given me a great platform to grow. In my time here, I have improved in all aspects, as a player and as a human being. CFC is a second family to me. I am very happy to stay here for longer and am motivated to help bring the ISL trophy back home to Chennai where it belongs,” said Samik who is keen to continue his development with the senior team.

A versatile forward capable of playing across the frontline, Aman has made waves at youth level for the Indian national team and Chennaiyin. Most recently Aman was part of the Indian team that won the 2019 SAFF U-18 Championship, scoring in a 3-0 win over Sri Lanka. He also featured for the Indian Arrows in the previous I-League season, on loan.

“I am very happy and excited to sign a contract extension with Chennaiyin FC. Having been a part of the club for three years, I have never felt away from home. The passionate fans, management, senior team players and the support staff have always been helpful to me. I feel this is the right place for me to grow and improve. I have always dreamed about representing CFC in the ISL. So it’s now time for me to work harder and give my best for the club,” said Aman, who aims to lead the line for CFC in the near future.

“I am delighted to see young blood like Remi, Samik and Aman continuing with us. They will add fresh impetus to the team, especially on the training pitch. At CFC, we have always promoted talent to thrive on the biggest stage, irrespective of the age. And I am certain they will provide healthy competition to the experienced players from the word go and develop exponentially in our ranks in the years to come,” said CFC co-owner Vita Dani on the welcome development.

All three starlets graduated from the AIFF Elite Academy in 2017 and signed for Chennaiyin shortly after. They continued their development with the newly formed CFC B team and gained match experience in the 2nd Division I-League and other national tournaments, with Samik and Aman also featuring for the CFC U-18s in the AIFF U-18 Youth League in their first season at the club. And recently, Samik and Remi played for CFC B in the 2019 Durand Cup in Kolkata followed by the latter making his ISL debut against NorthEast United FC in February 2020.