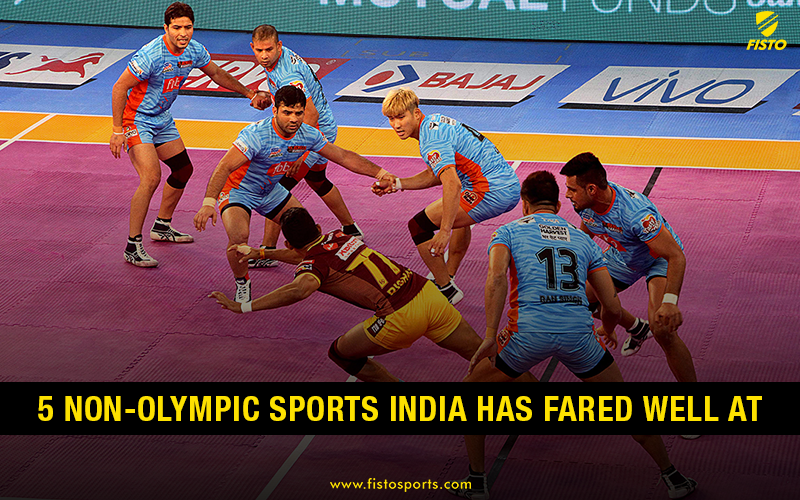 There has been various sports that has gained its recognition as Olympic sports over the years and there have been sports that have been removed from the list owing to not falling into the norms of the International Olympic Committee IOC and many other reasons.

The IOC has stepped up and granted the host nations the allowance to add certain sports to the Olympics only that particular edition which would be of benefit to the hosting Nation too.

Apart from these Olympic sports, there are various other sports, that India has excelled at the World stage.

Here’s the list of the top 5 Non-Olympic sports India has emerged successful at: Undoubtedly, Cricket which is the sport of the country.

The Indian Cricket team, which was initially regarded as  puny,  with no win until 20 years of International Cricket is today thriving to become an indomitable force, dominating the best Cricketing Nations of the World.

Sealing a spot, at the top of the table, the Indian Cricket Team has bagged Championships at all the Top Cricketing tournaments, including the ODI World Cup, T20 World Cup and the Champions Trophy. The sport which  is believed to have found its origin in the very country is an IOC recognized sport. Owing to the likes of players like Viswanathan Anand,  Chess  has found a recent upsurge in the country over the past two decades and is making marks at the International level.

Having  produced 64 Grand Masters and secured five World Championships, India has witnessed  a recent spike in the popularity of the sport, producing the youngest of the Grandmasters in the World. Kabbadi, a contact sport that originated from the villages in India has emerged to be an International Sport played widely. It was also featured as a demonstration sport at the Berlin Olympics in 1936, but it failed to get its recognition as an Olympic sport due to various reasons.

Kabbadi  is a very popular sport in India and holds a tremendous record of  Seven Gold at the Asian Games and has secured Gold  at all the Seven World Cups. The first match of The Pro Kabbadi League, which was inaugurated in 2014, witnessed a viewership which was ten times that of the FIFA World Cup in India and is one of the most avidly followed leagues in India. Cue Sports, though not one amongst the most prominent sport in India, it is a sport in which India has recorded humongous success.

Despite being spotted in the world maps of the sport, due to the salient and exceptional performances of few including that of Pankaj Advani, who was a 23 time World Champion and few others such as Wilson Jones, Michael Ferraria, Vidya Pillai and Geet Sethi, India has a whopping number of 37 Billiard Championships and 15 Snooker Championships to its name. With Ritwik Battacharya, Dipika Pallikal, Joshna Chinappa and Saurav Ghosal being the flag bearers of Indian Squash, the sport which was predominantly associated with recreational purposes has gained recognition as a competitive sport over the past few years.

India capitalizing the momentum gained from its India’s phenomenal medal run at the 2014 Asian Games has broken through the dominance of Malaysia and has shown traits of continuous improvements ever since.