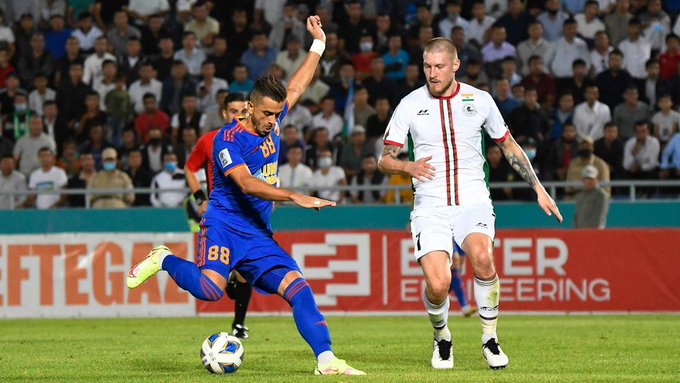 ATK Mohun Bagan’s campaign in the 2021 AFC Cup came to an end after a humiliating 6-0 defeat against FC Nasaf at the Markaziy Stadium in Uzbekistan on Wednesday evening. Khusain Norchayev scored a hat-trick in his team’s 5-0 lead at the half-time break. Donier Narzullaev scored the only goal of the second half as the Uzbek side completed a huge win.

As expected, FC Nasaf started aggressively in the inter-zone semi-final and in the first minute itself, Norchayev threateningly stormed into the box but his shot lacked the desired power and placement as Amrinder Singh grabbed the ball.

It wasn’t long before the hosts went ahead in the contest. India conceded a corner in the fourth minute and in the following piece of action, the delivery found the head of Pritam Kotal and hit the post on its way in -- to the great delight of home fans.

Nasaf continued dominating the game and 14 minutes later doubled their lead as Norchayev buried a nice pass from the left straight into the net. Three minutes later, Norchayev scored his second goal of the match again after a nice move from the left. Carl McHugh blocked the shot twice in the box before the third attempt bore fruit for FC Nasaf.

Things went from bad to worse for the visitors in the 31th minute as 19-year-old Norchayev completed his hat-trick. Once again the move began from the left and Akmal Mozgovoy found the youngster in the box through a delightful pass and the latter didn’t make any mistake and the home team went 4-0 up.

While experts and fans had expected a tough game for the Mariners, nobody could have foreseen such a demolition. Antonio Lopez Habas’ men failed to come up with a single shot as opposed to Nasaf’s 17 in the first half.

In more embarrassment, in the 42nd minute, Kotal was adjudged to have brought down Bakhrom Abdurakhimov from behind in the box and as a result a penalty was awarded to the home team. However, Oybek Bozorov hit the bar. He didn’t take much time to make amends as in injury time, he guided a low pass from Dilshod Saitov from the right into the net to put his team 5-0 up at the break.

ATK Mohun Bagan improved significantly in the second half in terms of defending but their game up front didn’t see any improvement. Roy Krishna, David Williams and Manvir Singh had very few touches of the ball in a disappointing show.

ATK Mohun Bagan’s resistance in the second half was at last broken in the 71st minute after Marko Stanojevic found substitute Donier Narzullaev in the box and the latter smashed the ball into the net to make it 6-0 in favour of the hosts. For the remainder of the game, Habas’ men managed to quiet the opposition attackers.

ATK Mohun Bagan will next play in the 2021-22 Hero Indian Super League (Hero ISL) on November 19, against Kerala Blasters FC at the PJN Stadium in Fatorda, Goa.