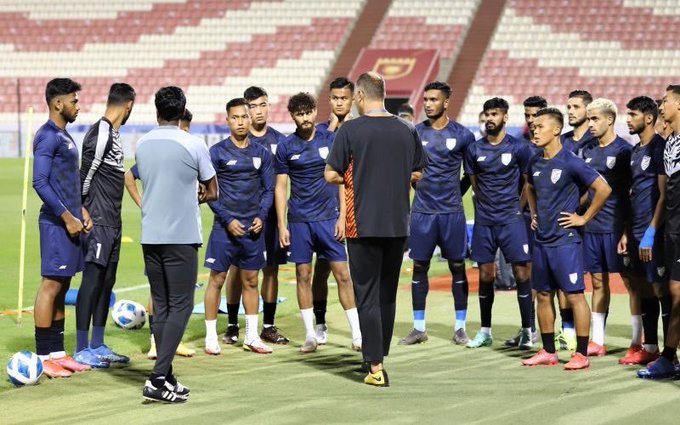 AFC U23 Asian Cup Qualifiers: U23 boys stay determined to make it count against Kyrgrz Republic

“Forget this match as fast as possible,” Head Coach Igor Stimac mentioned in the huddle, and paused again post India’s 0-1 loss to UAE in the qualifiers for the AFC U23 Asian Cup. He then looked at everyone, and reiterated waving his hand. “Just forget it. In 3 days, you have another 90 minutes against Kyrgyz Republic. That will be decisive. Get ready for that.”

The adrenalin was high, the sweat hadn’t dried, the panting hadn’t stopped; there was disappointment. But life is all about the next 90 minutes. One needs to own it, one needs to take control to move ahead forward together.

“We need to balance the next 90 minutes. We need to be excited, but not over excited. Such matches need a player to give 101 percent, and at the same time such matches demand that a player needs to be patient,” Rahim Ali quipped. “Every player first needs to take up responsibility individually, and that will transpire to the entire squad.”

Stimac has been the tireless trier going to every extent to stitch, mend, educate and enlighten. At the practice sessions he dummies the feints, points to the vacant spaces, and lays it down with the outstep of his foot – the ball glides through the green to evade the marker to get delivered to the unmarked one.

“We showed good team spirit in the last two games, and played together as one. That is going to be important for the next game as well. Playing as a team is very important and that is what makes executing game plans a lot easier for players,” Akash Mishra added. “We need to stay positive, and give our best.”

At the moment, all four teams in the group have the same number of points, have scored and even conceded the same number of goals. “It’s a very interesting situation in the group wherein the situation is extremely tight. Teams are quite different, but then again very similar in regards to what someone can do on the pitch. Everyone has their own strengths and weaknesses,” Stimac averred.

“We came into this qualifying group as underdogs against higher ranked countries. But despite that, we've managed to put ourselves in a position to qualify for the U23 Asian Cup. A win would almost seal our berth in the Asian Cup and that is what we are aiming for. We know it won't be easy against Kyrgyz Republic, but we've shown we can beat any team on our day,” midfielder Lalengmawia, fondly referred to as Apuia, explained. “To qualify from such a tough group would be a good achievement for us. We will give it our all.”

The team management, and the boys, however, are not going into the calculations. For them, the permutations and combinations can wait.

“It’s futile to look at the table,” echoed defender Ashish Rai. “We have 90 minutes ahead of us, and an extremely crucial 90 minutes. Everyone in the squad has made immense sacrifices all these years, and all of that needs to materialise in the next 90 minutes. It’s not an easy task, but then, no match is easy,” he opined.

Life is all about sacrifices, and the boys have done a lot since their U14 days – staying away from their families, and devoting life to football. This is their last chance in any age-group international tournament – they need to make it count.

The kick-off against Kyrgyz Republic is tomorrow (October 30, 2021) at IST 10pm, and the match will be telecast live on Indian Football Team’s official Facebook handle.

As per the AFC tournament guidelines, if two or more teams finish on same number of points, the ranking in each group is to be determined in accordance of descending order as follows:

A. Head to Head criteria – higher number of points obtained in the group matches played among the participating teams in question.

B. Superior goal difference from the group matches played among the participating teams in question.

C. Higher number of goals scored in group matches played among the participating teams in question.

G. Kicks from the penalty mark if only two participating teams still have an equal ranking and have played their last group match against each other.

H. The lower score calculated according to the number of yellow and red cards received in the group matches. I. Drawing of lots.