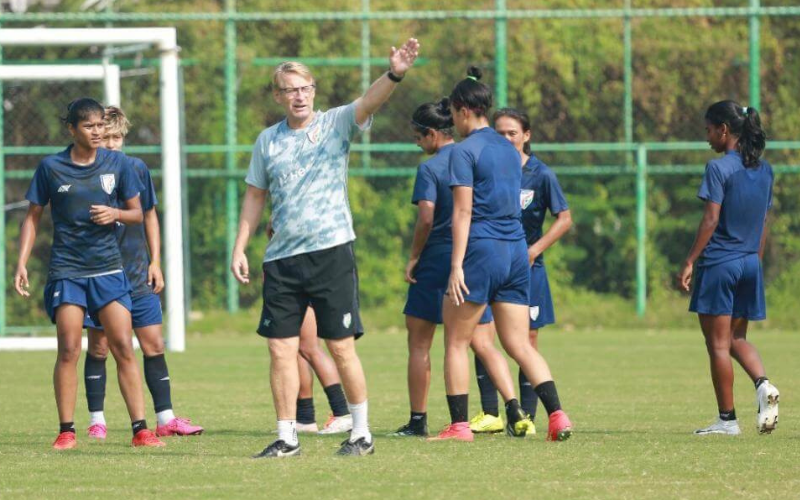 Indian football is gearing up to welcome one of the biggest footballing events to ever be held on its soil as the 2022 AFC Women’s Asian Cup begins in Mumbai and Pune from January 20.

India hosted the 2017 FIFA men’s U-17 World Cup, but this is the first big-ticket senior football competition that will grace the Indian shores.

India under the guidance of Thomas Dennerby will participate in the continental showpiece after a gap of 19 years. A former powerhouse in Asian football, India have twice finished as runners-up in this competition in 1979 and 1983 apart from a third-place finish in 1979.

However, the team’s last five campaigns as the AFC Women’s Asian Cup have ended at the group stage.

But India who will play this competition as hosts for the first time enter with renewed hopes of making a real mark and also probably scripting some history.

The #BlueTigresses 🐯 are all set for the Women's @afcasiancup India 2022 and this is their message for all you fans out there 🗣️#WAC2022 🏆 #BackTheBlue 💙 #ShePower 👧 #IndianFootball ⚽ pic.twitter.com/bqG9ZnxAdK

Dennerby has assembled a youthful team with an average age of just 23 but the team is built around some key experienced players.

The team will be led by experienced defender Ashalata Devi who will be partnered by Sweety Devi at the heart of the defence. Dalima Chhibber is the other notable name in the Indian backline who will also be key with her deadly deliveries from the set-piece. 16-year-old Shilky Devi and Sanju Yadav are the other players to keep an eye out in defence.

Kamala Devi, a scorer of 33 international goals will marshall the Indian midfield along with Anju Tamang and Indumathi Kathiseran who will be the other key players in that area of the field.

Up front the responsibility of scoring the goals will be shared by Pyari Xaxa, Manisha Kalyan, Dangmei Grace and Sandhiya Ranganathan.

The top two teams from each of the three groups make the cut for the quarter-finals while two best third-place teams also enter the last eight.

India though who are yet to qualify for a senior FIFA World Cup will have one eye on the 2023 showpiece in Australia. The top five teams in the 2022 Asian Cup will earn a berth in next year’s World Cup.

While it’s a big ask for the Indian team, it’s not impossible.

"Let's take it step by step. Of course, we have a dream, and that starts with us being one among the eight teams in the quarter-finals of the Asian Cup," said Dennerby on the FIFA website.

"If we can reach that level, anything can happen. I can only promise everyone that we will go out with a winning mentality and put in a huge effort. And that we will fight with our lives,” he added.

While all the focus will be on the Indian team’s performance, there will be plenty of big guns in action in India. Japan who have won the last two editions of the competition will be eyeing a hat-trick of titles.

Providing them competition will be Australia, South Korea and China.

The tournament will be played behind closed doors due to the Covid-19 pandemic, but India would feel the love of the fans watching on the television sets. And as they progress through this tournament, they’ll hope to win many more over.