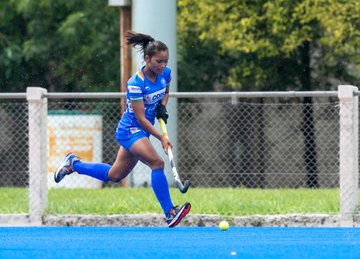 Having become a regular feature in the Senior National team since her debut in 2017, young forward Lalremsiami, who is eligible to participate in the upcoming FIH Hockey Women's Junior World Cup South Africa 2021, stated that she is looking forward to using the experience and learnings from the time spent in the senior set-up.

With as many as 72 international caps, Lalremsiami also acknowledges the responsibility that comes with playing at the highest level, including the historic Tokyo 2020 Olympics campaign, where the Indian eves finished fourth.

"I feel really lucky to have got the chance of experiencing the Olympics pressure. Most importantly, I got to learn how to deal with that kind of pressure, and it taught us to be brave. It's a great opportunity for me to be a part of the core probables for the junior world cup, and I am looking forward to using my experience and learnings from the time spent in the senior set-up," she said.

"At the same time, the onus will be on me, my role will be different here, it will be about taking responsibilities, and making crucial contributions. I am ready to take up that role of a senior player in this team," added the 21-year-old player.

Lalremsiami was a part of the Silver Medal-winning team at the 2018 Buenos Aires Youth Olympics and had played a pivotal role for the Junior eves at the Asian Youth Olympic Games Qualifiers, where she scored as many as seven goals to help the team finish second. The player from Mizoram, who is also the first female player from the state to feature in the Olympics, now aims for a podium finish with the Indian Women's junior Hockey Team at the upcoming World Cup.

"Our aim is to finish on the podium at the World Cup, and I believe we are capable of doing it. We have been in good touch in our training, it's a good atmosphere, and we are trying to improve our game each and every day," said Lalremsiami.

"The team is very inspired by the Senior players, everyone wants to be like them, represent India at the biggest of stages, and make the country proud. We also got a chance to play some internal matches with the Senior team, which I feel has been the best thing about the camp. We are getting a good level of exposure and insights from the senior players, and it will certainly help is in the World Cup in December," she concluded.