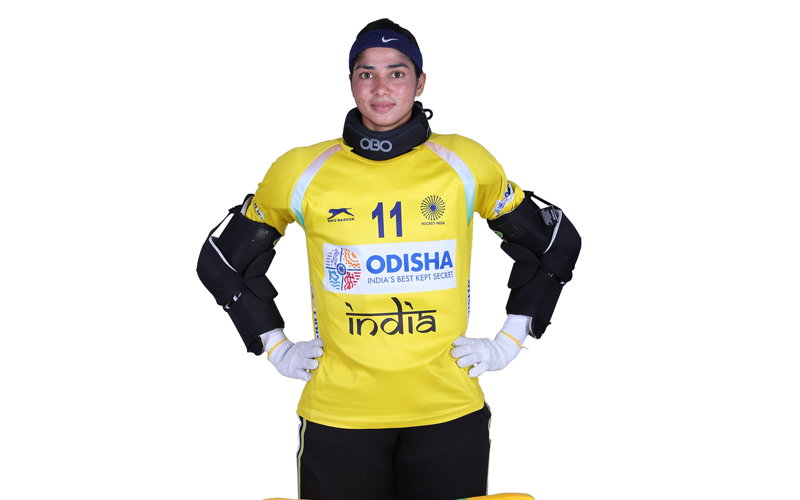 After having a very successful 2019 season, the Indian Junior Women's Hockey team has had their opportunities of playing competitive hockey take a hit in 2020 due to the on-going pandemic, but Goalkeeper Khushboo believes that the team is preparing for what is a very important next year for her side.

Speaking from SAI Centre, Bengaluru, where the Indian Junior Women's Core Probables are stationed for their ongoing National Camp, the young Goalkeeper from Bhopal said her team is looking forward to excelling at next year's AHF Women's Junior Asia Cup. "There is no doubt that we would've loved to be out there on the field competing with the best teams from around the world this year, but the situation has been such that we've had to focus on ourselves only at the moment. As we undertake sports activities here in Bengaluru, our focus is firstly on next year's all-important AHF Women's Junior Asia Cup where we will have the opportunity to impress, and also book our tickets to the FIH Women's Junior World Cup. There is only one aim for us - that is to win the Asia Cup, and then play the World Cup," said Khushboo, who made her Indian Junior team debut in July 2018 at the 6-Nations Invitational Tournament held in Belgium.

Throwing light on her journey to the Indian Junior Women's Hockey team, the talented Goalkeeper said it had always been a dream of hers to play for the country. "I used to watch some players back home in Bhopal where the sport is widely played, and I would always get attracted towards the sport. So I eventually worked hard at the school level, and managed to perform well and rise through the ranks to represent the state team for the first time at the Hockey India Senior National Championship in 2016. Since then, I have had the chance to play for the Indian Junior team, and have continued in my development as a player," said Khushboo, who was a student of the Cambridge Higher Secondary School, Bhopal.

The 18-year-old who has been a Silver Medallist at the 3rd Youth Olympic Games held in 2018, has also set her sights on representing the Senior Team at the biggest stage. "I think what I experienced representing India at the Youth Olympics in 2018 was something that will always stay with me. I keep looking back at those beautiful memories and it motivates me to keep doing well to eventually make it to the Senior Team, and also one day play at the Olympic Games for my country. I want to make my parents, my family and Coaches proud, and I think performing at the highest level is the best way to accomplish that," expressed the ambitious Goalkeeper, whose father works as an auto-driver, and mother as a home-maker.

Talking about who she takes inspiration from, Khushboo said India's veteran Goalkeeper Savita has been very supportive over the years. "I think Savita di has been a real role model for me. I've been lucky to have been guided by her in this journey of mine, and she keeps encouraging me all the time. Just to see her train and to be able to interact with her has been really helpful, and I would really want to repay her support by one day being able to come close to replicating what she's been able to do for the country for so many years," signed off Khushboo.