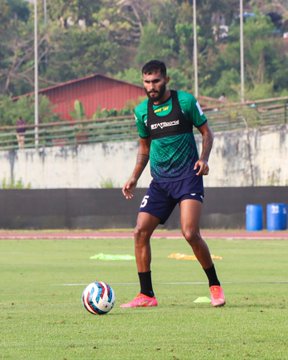 The arclights will be squarely on ATK Mohun Bagan's dugout when the heavyweights of Indian football take on NorthEast United FC in the 2021-22 Hero Indian Super League at the PJN Stadium on Fatorda on Tuesday.ATK Mohun Bagan decided to part ways with head coach Antonio Lopez Habas on Saturday after a string of four matches without a win - their longest in ISL. ATKMB are placed seventh in the table with eight points from six games. Habas had won the ISL with the erstwhile ATK in 2014 and 2019-20 becoming the first manager to win the title twice.Juan Ferrando is set to take Habas' place at the green and maroon camp but it remains to be seen whether the highly-rated Spanish tactician is on the bench on Tuesday. Ferrando himself got off to the worst possible start with FC Goa, losing the first three games before back-to-back victories against SC East Bengal and Bengaluru FC steadied the Goa ship.The Mariners will need to have their defensive concerns addressed. They have kept only one clean sheet this season. It's not just that they are conceding more goals, they are conceding more shots per match and shots on target per match in dangerous areas, inside the box.

Interim Coach Manuel Cascallana said, "The players are the principal actors now that the coach is not here. The responsibility lies with them. If you lose, you cannot blame the coach or tactics. The players need to step up and grab their moment. The only objective now should be to win the three points."Assistant Coach Bastab Roy does not think the current managerial situation will impact the team's performance. "The players are professionals. The only aim will be play well and win the match," said Roy.For NorthEast, placed ninth in the table with seven points in their kitty from the same number of matches, a 2-0 win against SC East Bengal has been a shot in the arm. Without the services of defender Hernan Santana and striker Deshorn Brown, NEUFC played really well in the second half with Khassa Camara doing the bulk of the spadework.Kamara had 93 touches of the ball, the most he has managed in a single match in his Hero ISL career. The 93 touches were also the most by a NEUFC player in a match this season. It was also the most touches by any player that evening."They (ATKMB) have a good team but we are thinking only about ourselves. We did some good work in our last game and we need to continue that. The players are in a positive frame of mind and looking to continue the momentum. Only way is to work hard and get what we want from the game," said coach Khalid Jamil on the eve of the game. Jamil also confirmed that Deshorn Brown and Hernan Santana are fit and will be considered for selection against Bagan.