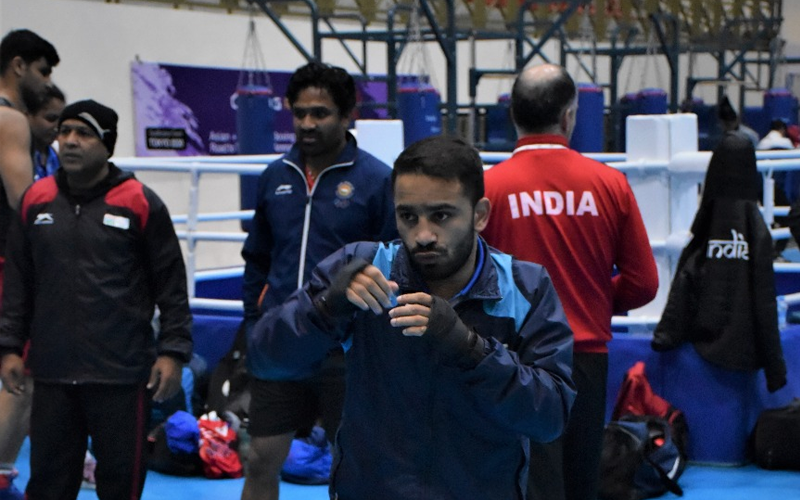 All eyes on Mary Kom, Amit Panghal as they begin quest for Tokyo Olympic berth

Fisto Staff
Share
London Olympic bronze medallist Mary Kom (51kg) and World Championships silver medallist Amit Panghal (52kg) will begin their quest for a Tokyo Olympic berth when they enter the ring at the at the Asian/Oceanian Olympic Qualifiers in Amman, Jordan on Saturday.
Mary’s hunger at the age of 37 has been exemplary as she sets her sights on qualifying for the Olympic for a second time. Riding on a deep desire to bring gold for the country, Mary Kom has been putting in the hard yards at training a few months after earning a bronze at the World Championships, that made her the first boxer – male or female – to win a staggering eight medals from the prestigious world event.
The six-time world champion has been seeded second in her category and she will face New Zealand’s Tasmyn Benny in the first round. Two wins will take her to Tokyo in what could realistically be her last appearance at the mega quadrennial Games and Mary will do everything possible to finish her Olympic career with the highly-coveted gold medal.
“Mary knows that this is her last Olympics and wants to do her best to close her dream with a medal. She has worked hard especially the reactivity work on the legs as well and has been working hard to be in good shape,” said Foreign Coach for Indian women's boxing Raffaele Bergamasco.
As for Panghal, he is currently enjoying a purple patch of his career. A gold at the Asian Games was the start of his dominant show and he only soared to even greater heights in his next few elite tournaments. With a gold at the Asian Championships and a historic silver at the World Championships, sky is the limit for the 24-year-old, who give his all to fulfil his Olympic dream.
He starts off his campaign against Mongolia’s Enkhmanadakh Kharkhuu after a first-round bye as the top seed in his category and has a 1-1 record against his opponent. Determined as ever, Panghal is upbeat to avenge his defeat in his last meeting with Kharkuu and get his campaign off to a flying start.
“Amit boxed against him before in Asian Games and beat him one-sided. And in the World Military Games, Amit lost by 5:0 to the same guy. Our plan is to create surprises in every round and am sure Amit would like to even scores as he faces his opponent tomorrow,” said CA Kuttappa, India’s head boxing coach.
The Indian boxers, meanwhile, were visited by Mr. Anwar Haleem, Ambassador of India to Jordan and Mr Puneet Ghai, Attache, Indian Embassy, who congratulated them and wished them best of luck for the ongoing Olympic Qualifiers earlier in the day.

Do you think the whole Corona Virus outbreak, is going to have a impact in the upcoming IPL season?