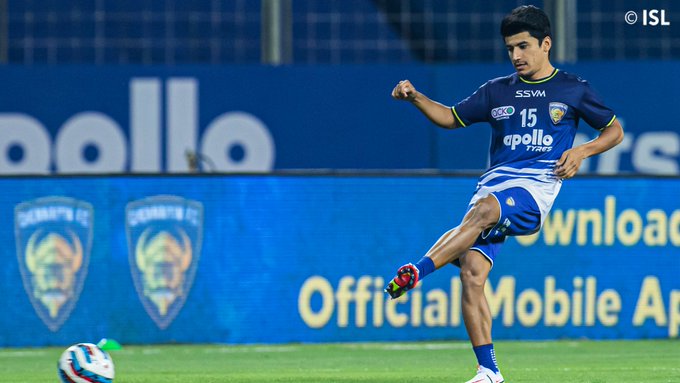 Anirudh Thapa, the midfield general for Chennaiyin FC has evolved from an embryonic stage to become one of the most potent exponents of his position in the country, all in the dashing dark-blue jersey. So, when he completed a total of 10 assists to create an all-time club record, it hardly created any fuss, because it has been a habit for Thapa to punch above weight for the side.

Detractors might argue with the fact that the ongoing season might not be the best for Thapa as per the numbers, but his stature in the setup has hardly diminished. Thapa provided the final pass which was converted by Mohammad Sajid Dhot in the previous game, as Chennaiyin FC collected a point against a well-drilled Hyderabad FC side. He then became the first player from the club and the eighth Indian footballer to reach the 10 assists mark in the history of the ISL.

The hard-working footballer has been assigned a more advanced role this season, with the ward almost executing head coach Bozidar Bandovic’s pointers to perfection. His number of touches in the attacking third this season stands 188, which accounts to 32.25% of the total touches (583). By the same parameter, this is the Indian international’s second best season after 2016, where his passing rate in the final third only reads 36.67 (however, he only played 67 minutes that season).

The Chennaiyin FC skipper still has a lot to offer, as per the reputation he’s built over the years and steer his side to a top-four finish. With a minimum of nine matches left, there’s every possibility that the Dehradun-based footballer could add four more assists to the tally and equal his best ever outing, back in the 2016 season. Nevertheless, he has already stitched up 406 passes this season (the second-most by a Chennaiyin FC player), at a rate of almost 37 passes per game, with an accuracy of 70.68%.

Even in a season where he’s not been top-notch, his numbers are quite intriguing. That’s what Anirudh Thapa brings to the table. If we sneak into his all-round exploits, 45 tackles, 23 interceptions, 12 clearances and 22 blocks just adds a silver lining. Bandovic’s side is eyeing for a third Hero ISL title, and to materialise the hope into reality, Anirudh Thapa will inevitably play a big role!

Interview | Anirudh Thapa : “I was not born for books, I was born for goals”