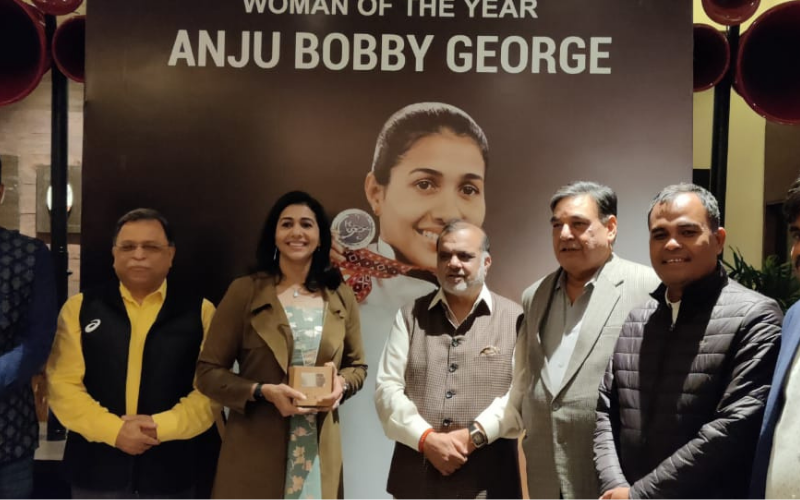 World Athletics Woman of the Year Anju Bobby George today expressed delight at receiving her cherished trophy from World Athletics Council member and Athletics Federation of India President Adille J Sumariwalla at the Hotel Lalit here. "It is wonderful to be able to hold it," she said.The World Athletics Awards 2021 on Wednesday, when Anju Bobby George was declared winner of the Woman of the Year Award, was a virtual event. Mr. Sumariwalla, who attended the World Athletics Council meeting in Monaco, brought home the trophy to hand it over to Anju here.  Indian Olympic Association President Dr Narinder Dhruv Batra was the Chief Guest at the ceremony.Clasping the trophy, the 2003 World Athletics Championships Long Jump bronze medallist said the global honour made her more determined to promote gender equality in sport, especially in India."The award is not the culmination of a journey but a reminded that a lot more work needs to be done in the years ahead," she said.

Mr. Sumariwalla said the enormous respect for Anju Bobby George in World Athletics circles was there for all to see. "As her colleague in the Athletics Federation of India, I felt so much pride when the honour was bestowed upon Anju. She has already done tremendous work and will be inspired to contribute to the evolution of sport in our country," he said.

In 2016 @anjubobbygeorg1 opened a training academy for young girls, which has already helped to produce a world U20 medallist. A constant voice for gender equality, she also mentors schoolgirls for future leadership positions within the sport.

It is well known that Anju Bobby George is actively involved in the sport. In 2016 she opened a training academy for young girls, where World U20 medallist Shaili Singh's talent has been polished. The AFI Senior Vice President also mentors schoolgirls for future leadership positions within the sport.

It is the right time for me to take up leadership position in AFI: Anju Bobby George