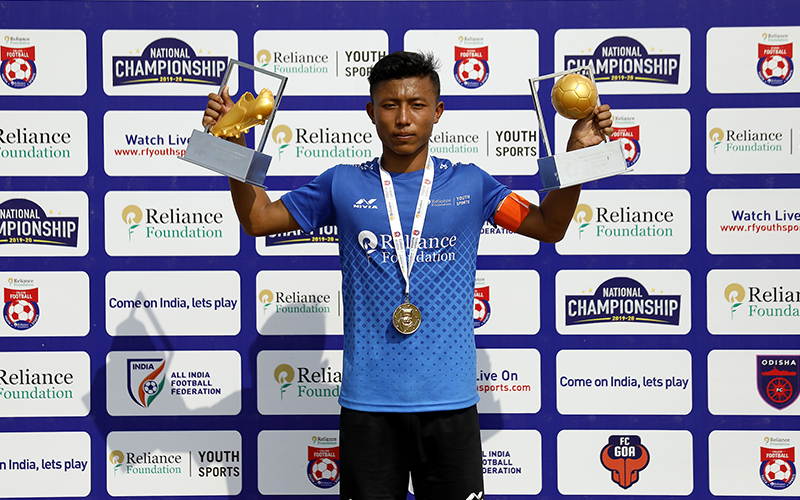 Annaroy Soibam called up to Odisha FC Youth Set Up

One of India’s burgeoning young football talents Annaroy Soibam has been called up to the Odisha FC youth set up — marking a milestone in his career.

Now gets the chance to impress Sandeep Alhan, Head Coach of the Odisha FC U-18 team.

Annaroy Soibam, who captained the Unique Model Academy, Imphal to the title in the Sub-Junior (U-14) Boys category at the Reliance Foundation Youth Sports (RFYS) National Championships for 2019-20, has earned a call-up to join the youth squad of Hero ISL Club Odisha FC. Soibam, who won the Golden Boot at the championships for scoring 11 goals in five matches, and the Golden Ball for being the best player in the tournament, impressed scouts from the club who were at hand in Mumbai during the tournament to identify upcoming talent.

Sandeep Alhan, Head Coach of the Odisha FC U-18 team, who will now have Soibam directly under his supervision described the RFYS tournament as a “very good and competitive” platform that provides an opportunity for players such as Soibam to be scouted by professional clubs. “He has a good attacking sense,” Alhan said , describing Soibam’s attributes as a footballer. “We can use him in all attacking positions, as a winger on either side or as a forward. He has good shooting qualities and is a good finisher.”

“I am very excited to be a part of Odisha FC,” said Soibam. “It is a great opportunity for me at this stage of my career and I will try to do my best for the team.”

“I was very happy to participate in a competition as professional as RFYS. It gave young players like me a chance to showcase my talent and play against the very best players from across the county. My School, Unique Academy School, was crowned winners in the Sub Jr. Category and in the process I ended up winning the Golden Boot and Golden Ball award. It gave me great pride and joy to be crowned the best player of the tournament.”

Soibam’s unmistakable ability was on display throughout the tournament in January at the Reliance Corporate Park in Mumbai, culminating in his man of the match performance in the final against Progress High School from Goa. Once his team had taken a dominant 3-0 lead and virtually sealed the title in the first half itself, Soibam produced some magic of his own with a rasping left-footer after motoring past a hapless defender for the team’s final goal in a 4-0 sweep. In every match of the competition, Soibam made life difficult for defence line-ups with his eye-catching speed and ball awareness, showing himself to be equally adept at scoring with either foot.

“We are a very pleased that Annaroy is getting the chance so early in his journey to be part of an excellent professional set-up such as Odisha FC,” an RFYS spokesperson said. “The objective of organising the tournament is exactly this, to provide a platform for kids across the country to display their talent and get noticed for higher honours. Annaroy was one of the standout performers at the National championships and we hope that in the upcoming years many more such talented players are discovered at the tournament, who can go on to enrich Indian football.”

Having lost his father as a child, Soibam was encouraged to chase his footballing dreams by a doting uncle while his mother and sister have also been pillars of support. He knows there is a long way to go before he is the finished product, but the attacking style of play that Soibam prefers has already pitchforked him into a professional set-up, a door he says has only opened because of the opportunity he got at the RFYS National Championships. He urges other aspiring athletes to take learnings from his experience.

“I would just like to tell them to perform at the best level and take advantage of such a great opportunity,” says Soibam. “It could really change your career and give it the much needed boost required.”

“At the Odisha club youth set up, we will provide all facilities and a professional pathway,” assures Alhan. “The recruits can train with us in all footballing aspects, like technical, tactical, psychological and physical activities. After this training they can aspire to reach a higher level such as joining our senior team and play for the country.”