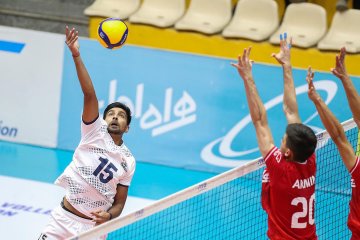 Hosts Iran smashed the India’s sweet dreams of advancing to the final for the third time in history after ousting them in thrilling straight sets 25-15, 25-19, 25-18 to power their way into the Monday’s showdown against Japan at the 14th Asian Men’s U18 Volleyball Championship at the Federation Hall on Sunday.

The exceptional win gave Iran a step closer to clinching their 8th title in this topflight age-group championship and the third final clash against old foes Japan. In the previous two editions in 2008 and 2014, Iran powered past Japan in straight sets in both occasions to underline their supremacy over the biennial competition.

India will battle it out with Korea in the bronze medal match. In the preliminary round, India have already beaten the 1999 champions Korea 3-0 in Pool B clash and both sides will renew their rivalry in their third-place clash on Monday.

Against India in the do-or-die semifinals, hosts Iran, spearheaded by powerful Armin Ghelichniazi, made a solid start and caught fire shortly after that. With Armin and Mohammadmani Alikhani Mani attacking spectacularly at both wings, Iran clinched the totally one-sided first set 25-15.

As India became riddled with several unforced attacking mistakes in the second set, Iran grabbed the chance to counter-attack aggressively and block well to advance to 20-16 and went on that fine form to win the set 25-19.

Taking a 0-2 disadvantage, India came back to the competition court with less mistakes in the third set but found the rivals unstoppable and even the substitutions could not turn the tide for them. Iran went on their consistent play to win the third set 25-18, match and a final berth.