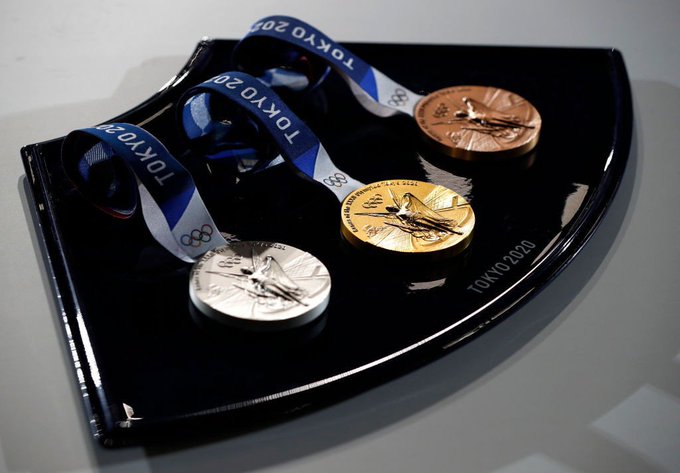 Athletes who finish on the podium at the delayed Olympic Games here will collect their own medals from a tray, rather than having them draped round their neck, due to COVID-19 measures set to be in place at Tokyo 2020.

International Olympic Committee (IOC) President Thomas Bach announced a series of steps that will be taken during the medal ceremonies to limit the risk posed by the COVID-19 virus and described the change as "very significant."

The medal presenters, typically members of the IOC or other guests, will be required to wear disinfected gloves, Bach said.

They will place the gold, silver or bronze medal - made of entirely recycled consumer electronics - on a tray and the recipient will pick them up and place it around their own necks, in a break from a tradition that has been part of the Olympics for decades.

The move contrasts with UEFA's method at major tournaments held during the pandemic.

UEFA President Aleksander Čeferin presented the medals to winners Italy and runners-up England in the normal way after the final of the European Championship on Sunday (July 11), as well as the Champions League and Europa League in May.

Both the athlete and the presenter will wear masks under the measures outlined in the playbooks, the series of strict rules the IOC and Tokyo 2020 hope will ensure the Games are "safe and secure".

The IOC had previously revealed athletes or teams who are denied the chance of competing in a gold medal match in certain events will be replaced but will still receive a silver medal.

"If an athlete would have taken part in a medal event but cannot, they will receive the minimum level of medal they would have received for example in a final," IOC sports director Kit McConnell said last month.

It could see two silver medals presented in several sports at the Games, although the athlete who has tested positive will not be able to attend the ceremony.

There are scheduled to be 339 events at the Tokyo 2020 Olympics, which are due to open on July 23 and close on August 8.