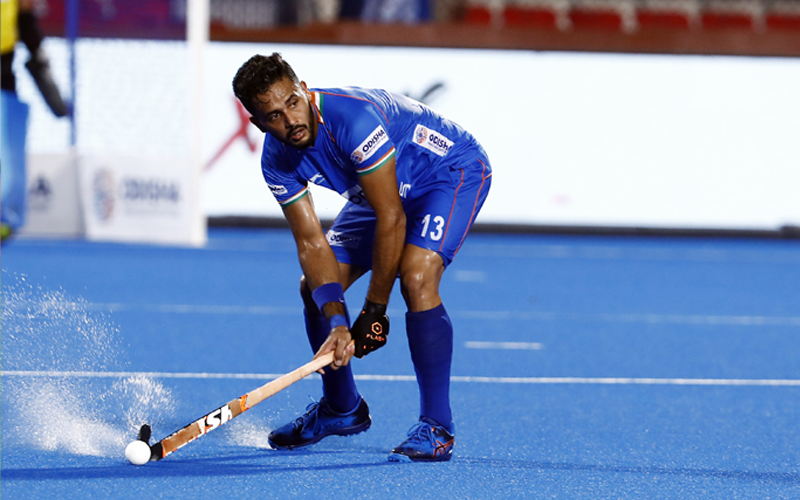 "Atmosphere & energy you get from fans is what we all play for," states Indian Men's Hockey Team Defender Harmanpreet Singh

On the three year anniversary of the Odisha Men's Hockey World League Final Bhubaneswar 2017, the 24-year-old drag-flicker recalled fond memories of his team's Bronze Medal win at the tournament which was played under the electric atmosphere of the Kalinga Stadium

Three years ago, on this same day, the Indian Men's Hockey Team took to the field at the Kalinga Stadium in Bhubaneswar for their opening match of the Odisha Men's Hockey World League Final 2017 against eventual winners Australia in a match which ended all square at 1-1. It was a tournament which saw Indian Defender Harmanpreet Singh stake his claim in the team, with some fine performances as India claimed a Bronze Medal in front of their home support.

"It was definitely one of the biggest tournaments for me, and especially with the Senior Team. Having won the FIH Junior Men's World Cup in 2016, the Odisha Men's Hockey World League Final 2017 gave me the chance to experience the thrills of playing the highest form of hockey at the grandest of stages," expressed Harmanpreet.

"We did not have the best of starts in our Pool matches, but I think we finished the tournament really strongly. However, what I really learned from that tournament was the fact that if you keep pushing hard, you'll eventually achieve your goals, regardless of which or how big an opponent you're facing," added the drag-flicker, whose team lost 2-3 to England, 0-2 to Germany after their first Pool match against Australia.

The 24-year-old was India's joint highest scorer in the tournament along with fellow drag-flicker Rupinder Pal Singh with two goals each, and believes playing with the veteran has helped him immensely in his career. "I've always looked up to Rupinder because when I was a Junior boy, he was always putting in exceptional performances on the field. So to have had the chance to practice, play and share the same room with him, has been an honour for me. I've learned a lot from my interactions with him, and I hope we can both continue to play well for the team going forward," said Harmanpreet.

Harmanpreet also scored the winner in the Bronze Medal match against Germany as he struck from a Penalty Corner after Mark Appel had equalized for the Germans, cancelling out SV Sunil's opener. The Defender recalls the moment, "I think it was a great moment because the entire Kalinga Stadium erupted and was on their feet with joy. There are moments in your career you always remember and recall very fondly, and it is definitely one of my best moments in the Indian shirt - and it meant more because it was my first major Medal with the Senior Team," stated Harmanpreet.

"I believe having that home crowd at the Kalinga Stadium really gave us a boost, and it has always carried on - even at all the tournaments we've played there since then, it has to be my favourite stadium to play in. I hope we can get back on the field as soon as possible, and welcome back fans inside the stadium. That atmosphere and the energy you get from your fans is what we all play for," signed off Harmanpreet.