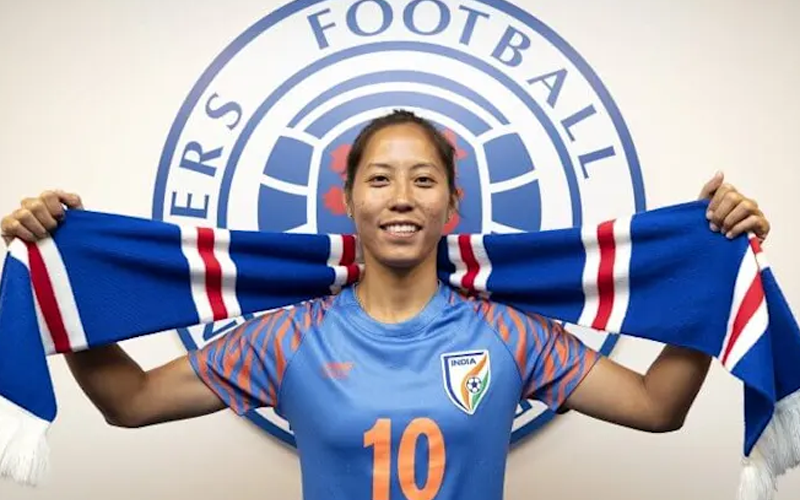 Indian football women’s team captain Ashalata Devi feels Bala Devi’s European sojourn will have a huge impact on the next generation of footballers.

In January, striker Bala Devi became the first Indian woman footballer to sign a full-time professional contract with a European club when she moved to Rangers Women FC. The club plays in the Scottish Women’s Premier League, the top division in Scotland.

"Bala di playing for Rangers is a very big opportunity as it shows us the way to play abroad and for the next generation too. I hope the young generation gets inspired by her and (goalkeeper) Aditi Chauhan,” Ashalata Devi said in a chat with the All India Football Federation (AIFF).

Indian football team custodian Aditi Chauhan has also played in Europe earlier with West Ham Ladies, a semi-professional team, during her time studying in the UK.

“I think that youngsters can also earn opportunities with foreign clubs. Everyone has a dream to play for a top club and so, everyone will work hard and give their full dedication to the game. The effect will be huge on the youngsters in the near future,” Ashatala Devi added.

Another factor that will boost the growth of women’s football in India is that the country is set to host the FIFA U-17 Women’s World Cup in 2021 and the AFC Women’s Asian Cup in 2022.

By virtue of being the hosts, the Indian football women’s team will play in the Asian Cup after a 19-year gap and veteran defender Ashalata Devi is focused on putting up a good show.

“My country and the national team are always my first focus. So, I want to share my experiences first with all my juniors as it will help them adapt better,” she said.

“If I get the opportunity to play overseas, I will surely go but my focus is now on the AFC Asian Cup.”