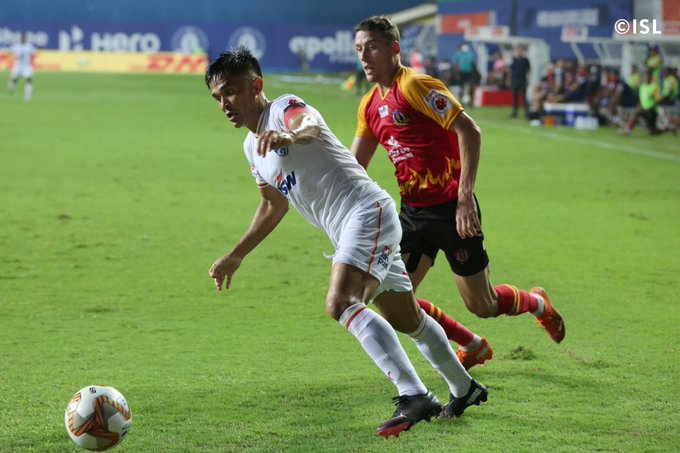 Both goals for Bengaluru came in the first half through Cleiton Silva (12') and a Debjit Majumder own goal (45') sealing their fourth win of the season to jump to the 6th spot on the points table.

Bengaluru went into the break with a comfortable two-goal cushion and looked livelier than their opponents. The possession stats were in favor of SCEB in the opening half but they lacked efficiency in the final third, failing to register a single shot on target.

SCEB created the first big chance of the game in the sixth minute. Anthony Pilkington fed Bright Enobakhare on the left flank. He squared the ball for Harmanpreet Singh but Ajith Kumar produced a fine block to bail his side out of trouble.

However, the Blues soon drew first blood after a well-taken set-piece. Gurpreet Singh Sandhu took the goal kick and pumped a long ball forward towards Sunil Chhetri, who flicked it towards Silva. The Brazilian took one touch before smashing the ball into the back of the net on the half volley.

The Blues doubled their lead as the first half drew to close with Parag Srivas forcing an own goal from SCEB. Rahul Bheke made his way towards the byline and his cutback found the youngster, who struck his shot first time. The ball touched the post and then SCEB keeper Majumder's leg before trickling into the back of the net.

East Bengal's struggles in the final third continued after the change of ends, with Fowler's team failing to register a single shot on target.

Bengaluru, meanwhile, kept pushing for a third. Udanta Singh found Silva on the right wing, whose cutback found Chhetri. The Bengaluru captain made a run in to the box but blazed his shot over the bar.

Another great chance fell to Chhetri late on, and the Blues could have had a third had it not been for the crossbar coming to SCEB's rescue. Rana Gharami failed to deal with Suresh Wangjam's chipped pass which was received by Chhetri. The Bengaluru talisman took a touch and hit the ball on the half volley, but his shot came off the frame.