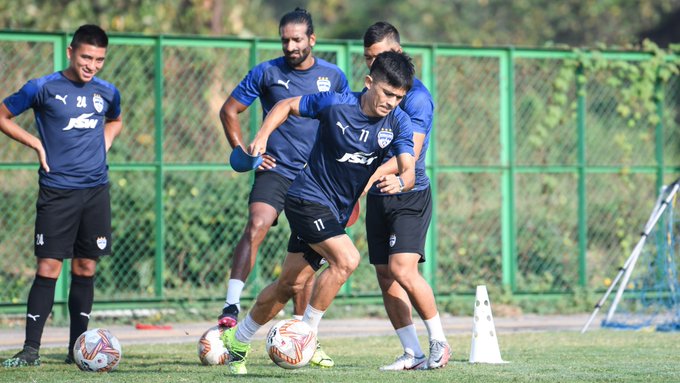 Heading into this game both sides would love three points to help them achieve their goals.

Mumbai City FC were the first to seal their berth in the playoffs of the Hero Indian Super League. Coach Sergio Lobera's side has been in pole position for the most part of the season. However, their recent form has seen them drop crucial points and has put their top spot at risk.

But that doesn't worry Sergio Lobera much as his side prepares to take on a struggling Bengaluru FC at the GMC Stadium, Bambolim, on Monday.

The Islanders' last four games have seen their worst stats this season. They have failed to keep a single clean sheet in those games and conceded seven goals, compared to just four conceded in the previous 12 games. Lobera's team has faced 22 shots on goal in these four games.

"I think we are in a very good situation. The reason is the good job we have done before and it's always possible to improve and learn from our mistakes. I am proud of the attitude of the players. My team is ambitious and with this attitude, I am very positive for the coming games," said Lobera.

Lobera is aware his side cannot have any more slip-ups as they eye an AFC Champions League spot. The Spaniard is also aware of the potential threat his side faces against BFC.

"Every game is difficult and playing with BFC is difficult because they are a team of very good players. They have motivation after the arrival of the new coach. It's difficult but we can with this," said Lobera.

Mumbai star Hugo Boumous will miss the encounter due to suspension and his absence will be a blow for Mumbai. The Frenchman has contributed nine goals and created 38 chances for his side.

For Bengaluru, it is a must-win situation if they are to keep their playoff hopes alive. However, their track record against Mumbai isn't great. BFC have lost on four occasions and drawn one in five outings.

Of late, the top four teams have been dropping points, which has thrown open the race for the third and fourth playoffs spots. However, interim coach Naushad Moosa believes that they have to take it one match at a time. "The results are going in everybody's favor not only ours. It's important we stay focused. Our defense been a concern but we are working on us," he said.

"We have three games. We have to stay positive and play good football and try and get the three points," he added.