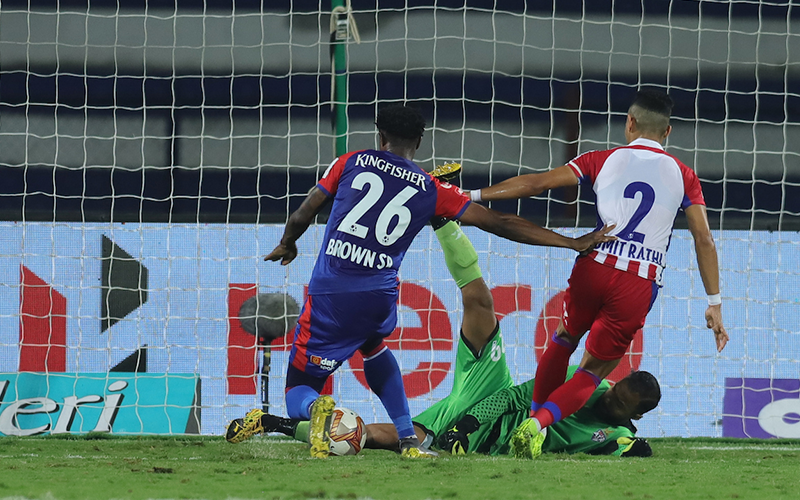 Deshorn Brown’s opportunistic strike (31') proved to be the difference in what was a closely-fought first leg battle.

Edu Garcia kicked off an even contest with a shot from outside the box that went wide in the second minute.

Bengaluru soon made their presence felt when Dimas Delgado whipped a dangerous ball into the box. Rahul Bheke rose the highest inside the box but his header flew inches over the crossbar.

ATK's dangerous duo, Roy Krishna and David Williams, combined well to put the ball into the net in the 17th minute. Krishna found his teammate with a well-timed lob in behind the Blues defence. Williams handled the ball as he brought it down and struck it brilliantly past Gurpreet Singh Sandhu and the goal was eventually disallowed due to the handball.

The hosts continue to put pressure on the ATK defence and their effort bore fruit a minute after the half an hour mark. Gurpreet's punt from his own half ended up at the feet of Juanan whose shot from inside the box was hit straight at Arindam Bhattacharya. The ATK custodian messed up the save and spilt the ball into the path of Deshorn Brown who broke the deadlock.

Brown had a chance to double his team's lead when he received the ball outside the box before the break. The striker unleashed a piledriver that flew inches over the bar, much to the relief of Arindam in ATK's goal.

As ATK pressed for an equaliser after the break, Bengaluru tried to make use of the vacant space in behind the visitors' defence. Three minutes after the restart, Brown latched on to a ball in behind the defence, cut in from the right and floated a cross towards the left-hand side of the box for Sunil Chhetri whose header was tipped over by Arindam.

John Johnson nearly unlocked the Blues defence with a wonderful diagonal ball after the hour-mark into the feet of Michael Soosairaj. The Indian winger tried to beat his marker from the left flank, but Suresh Wangjam put in a good block to clear the danger and stop the ATK winger's charge.

ATK struggled to make use of the ball in the final stages of the game and allowed Bengaluru to hit them on the counter. Arindam made amends for his earlier fumble with a brilliant save to deny Kevaughn Frater's left-footed effort from the edge of the box.

Bengaluru suffered a late blow when Nishu Kumar was sent off for a tug on Krishna. The Fijian striker was brought down outside the box by the full-back and the latter's last-man challenge was punished by the referee.

ATK, however, were unable to force an equaliser and now have to come from behind in the reverse leg in Kolkata next Sunday.