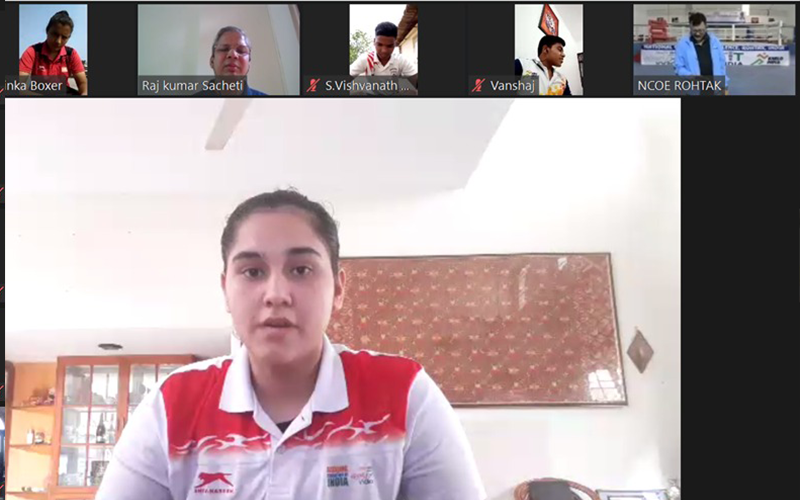 Having pioneered online classes for boxers in association with the Sports Authority of India (SAI) during lockdown, the Boxing Federation of India (BFI) has taken yet another step forward by involving parents of junior boxers in the E-pathshala programme.

Through the innovative Online Athletes Coaching & Education Programme (ACEP) in Boxing – Youth, Junior and Sub-Junior Men and Women, which has been going on for a month, BFI educated the next generation pugilists and their parents as a part of the ongoing Khelo India initiative.

Since parents play an integral role in the decision-making of the rising stars and in their attempt to pursue a sport at a higher level, educating parents has been a big boost to the sport’s future in India.

500 young boxers were part of this special session who are Khelo India scholars and part of  the 2028 Olympics pragramme.

Today on completion of a month, the Sports Minister Kiren Rijiju, Sandip Pradhan DG SAI, BFI President Ajay Singh and 6 times World Champion, Mary Kom was also present along other top officials for the online interaction with the young stars where more than 500 boxers from the remotest corners of India tuned in.

“Our young boxers are lucky because we never had the best boxing practices coming to our door and with parents also taking part in such daily fitness activities, the boxers have a strong backing in their pursuit of the sport. I really enjoyed the feedback of the young boxers and their parents and I am hopeful of seeing these young stars shine in the future. I would like to compliment BFI and SAI for coming together and giving a new direction to our young boxers. I thank Mr.Ajay Singh and his team for transforming the status of boxing in India,” said the Sports Minister.

The elite coaches, led by Performance Director Santiago Nieva and key officials from the National Centre of Excellence and BFI have been conducting high-level, visually demonstrative training programmes of international standard to guide the young stars with the right advice and the best global practices. The classes received an overwhelming response with close to 650 participants attending the sessions on a daily basis. Junior Boxer sharing his experience with the SPorts Minsiter during the interaction.

“One of the biggest advantages of this unique initiative for our rising stars is that they will learn the interface of the right techniques from a very young age – something our top boxers did not have in the past. It has been the focus of BFI to ensure that kids don’t have to learn and then unlearn to reach the peak in their sport. And that is the principal reason why we would be putting up these videos also on platforms like Bookmyshow for every young athlete to access publicly and pick up the nuances of the sport anywhere in the country,” said Ajay Singh.

The videos will be available on the Bookmyshow from June 15 and the training will continue until active sports tournaments resume.