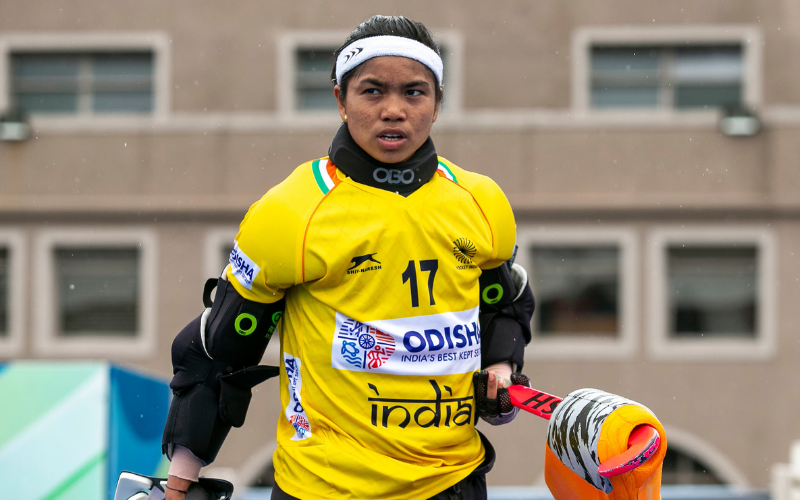 Bichu Devi Kharibam: 'Savita and Rajani didi help me work on my game'

Bichu Devi Kharibam says she is becoming a better goalkeeper while working with her two senior colleagues in the Indian Women's Core Probable Group.

Goalkeeper Bichu Devi Kharibam's career has been on a steep rise since making her breakthrough with eye-catching displays in the 2018 Youth Olympics, a tournament where India clinched the historic Silver medal. In the following year, she was named 'Goalkeeper of the Tournament' in the 4 Nations Junior Women Invitational in Dublin and was fast-tracked to the senior squad.

Bichu now has to compete with seasoned campaigners such as Savita Punia and Rajani Etimarpu for a spot in the Indian team. But the 20-year-old is calm about her role with the senior team and is relishing training alongside her seniors.

"Savita didi and Rajani didi help me a lot," Bichu said. "I approach them with my doubts and are more than happy to help me out. Even they ask me about their weaknesses, and how they can go about correcting them despite me being new at the senior level. They treat me like a friend...or like a sister. They've given me a lot of love and I respect them a lot."

Part of the Core Probable Group that is training for the Olympic Games, Bichu understands this is a great opportunity for her to make an impression and imbibe the qualities it takes to be a standout goalkeeper.

"I get really excited just thinking about the Olympics. Because it's such a big tournament, I have to work harder. I'm trying to absorb all the advice my seniors and coaches have been giving me," she stated.

The Manipuri earned some much-needed game time during the team's tour of Argentina last month. India didn't get a win against the world No 2 side but were praised for the resilience and character they showed in each of the matches.

"I was delighted to get back on the pitch while playing against Argentina," Bichu reflected on her team's first tour after more than a year. "We played with a lot of spirit and passion. I was nervous during the first game, playing after such a long gap. But it got better as time progressed.

"Previously, we used to be beaten by huge margins against Argentina, but I think, our defence held strong throughout the tour. I thoroughly enjoyed my time there," she added.

For young Bichu, aspiring to play at the Tokyo Olympics is just the beginning. She has mapped out her plans for the future. "I want to play in all of them – Commonwealth Games, Asian Games, and as many Olympic Games possible," she said brimming with determination