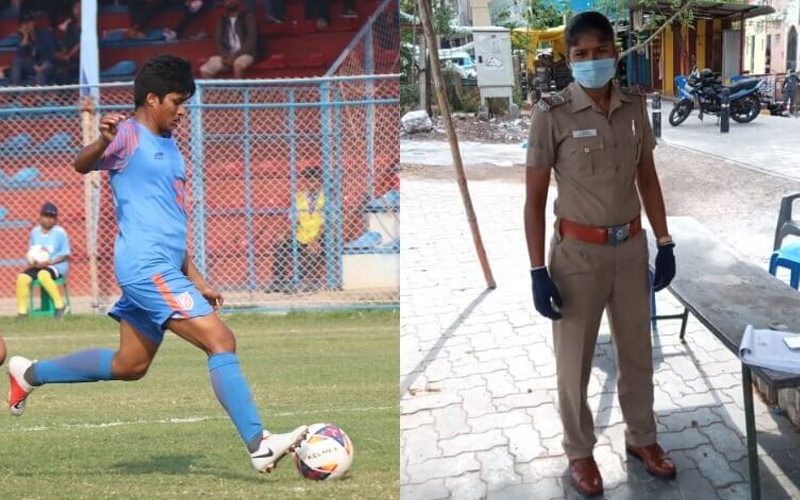 Indian women's football team mid-fielder Indumathi Kathiresan has donned the khaki uniform to perform her duties as a police officer during the lockdown caused by the coronavirus crisis in the country.

Indumathi Kathiresan, who is a Sub-Inspector in Tamil Nadu Police, is manning the streets of Anna Nagar in Chennai, trying to keep everyone safe and punishing those who are flouting the rules of the lockdown, which was extended till May 31 by the Indian government.

“It has been a difficult situation for the entire country. But taking the necessary precautions is paramount to the safety of one and all. We try to ensure that everybody is observing the guidelines and that nobody who does not need to be outside,” said Kathiresan to the-aiff.com.

Read: 8 Indian Women Athletes Who Have Also Been Social Activists

Indumathi Kathiresan has made 34 appearances for India and scored 12 goals so far for the national team since making her debut in 2014.

“It has been a demanding time for me personally. I have barely had the time to do anything else. "In difficult times like these, you generally want to spend some time with your family, but I have not had much opportunities to do that,” Indumathi informed. “It is a call for the nation. I have to play for the nation every day during Covid19 pandemic, and I had to respond fast,” Kathiresan said.

Indumathi Kathiresan was part of the Indian side which won a gold medal at the 2016 Asian Games and also played at the 2019 SAFF Women’s Championship in which she was the joint-top scorer of the tournament with four goals.

Kathiresan had also led Sethu FC to the Indian Women’s League (IWL) title in the 2018-19 season.

“Of course, it is an absolute honour to play for India. There are some moments in the India jersey, like when we qualified for the Olympic Qualifiers Round 2, or when we won the SAFF Championship last yearI will never forget these moments. "But I also take a lot of pride in serving the country in my police uniform, at a time when the nation needs us the most. I will keep serving as long as my nation needs me to serve.

“It is for the people of this country that my colleagues and myself are working day and night. We hope that you too, in turn, would help us out by following the safety precautions and keeping yourself safe,” Kathiresan said.