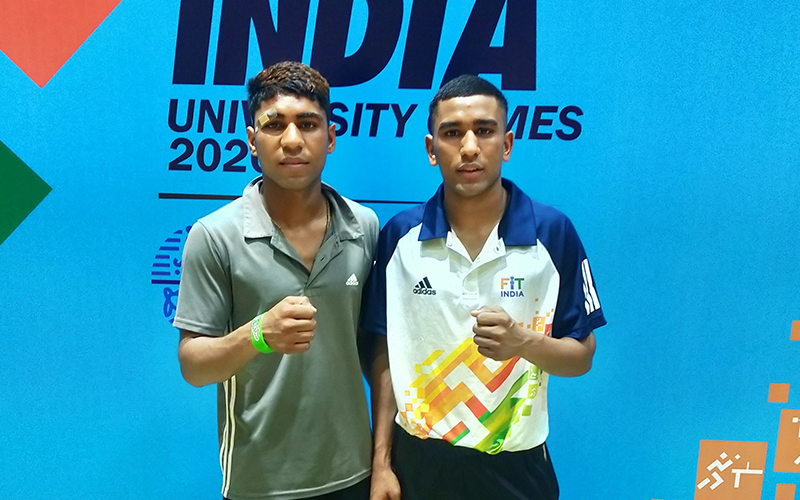 It is not often that you would see siblings studying in different schools or universities; or indeed, a pair of brothers or sisters taking on each other in a high-profile final in an individual sport.

That’s precisely what happened here on the final day of the Khelo India University Games 2020 in Odisha, in the boxing ring. Gurwinder Singh (Punjabi University, Patiala) fought with younger brother Harwinder Singh (Chandigarh University, Chandigarh) in the final of the 49kg category, adding a dash of emotion to the drama.

Gurwinder got the better of Harwinder, in what proved to be a close encounter, to clinch the gold. He is now 2-1 up in their head-to-head clashes.

“When we get into the ring, we forget that we are brothers. Both of us want to win at any cost and we show no mercy to one another,” Gurwinder said.

As proof of the intensity of their rivalry, he showed the cut above his right eye that surfaced during the bout.

Interestingly, the brothers are coached by the same man: Cuba’s BI Bernandez. The Cuban is credited with revolutionising Indian boxing, even becoming the first non-Indian to receive the Dronacharya award in 2012 for his efforts. He believes that the brothers have a bright future in the sport.

“They are very good boxers and they train really hard. I think they have a bright future, they need a little polish to their technique and I’m happy that both of them have won medals here in the Games. Last year in the University nationals, Harwinder won gold, and I feel he is just a wee bit better than the older one,” the coach who has groomed stalwarts such as Vijender Singh and Mary Kom.

Gurwinder started boxing at the age of 13, a year later, the younger brother followed him into the ring.

“Initially, I was supposed to go for cricket trials but my father asked me to choose boxing instead. My brother soon followed me. I’m happy that both of us chose the same sport. It is fun to fight against him,” Gurwinder laughed.