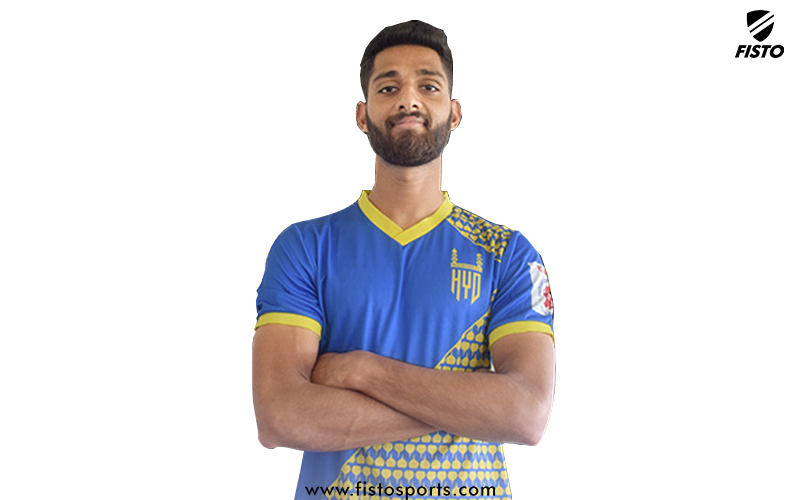 Goalkeeper Anuj Kumar is a man on a mission, which won’t stop until he reaches his goal – playing for the national team.

Anuj Kumar is the latest in a line of impressive young keepers and has improved with every step up he has made in his career to date.

Anuj was a part of the FC Pune City U-19 side that emerged victorious in the 121st U-19 IFA Shield tournament by beating Mohun Bagan in the final. His incredible double penalty save in the final was an example of his skill.

He was also part of the side that won U-17 SAFF Championship in Nepal by beating the home side in the finals.

The young goalkeeper was part of FC Pune City’s squad for Hero ISL 2017-18 and 2018-19 before he was snapped up by Hyderabad FC last year. He is yet to make his debut for the Hero ISL but is very highly regarded as one of the up-and-coming goalies in the game and you're likely to hear a lot more about him over the coming years.

I started my football journey at the age of 10 or 11 when I moved to Delhi. I studied at the CRPF Public School, Rohini. I am basically from a small town in UP called Eka, so frankly I can tell you that I never thought of becoming a football player. I always wanted to become a judge till I reached Delhi because there was no football in my town, everyone used to enjoy playing cricket. I used to be out of my home for hours playing cricket.

But as soon as I reached Delhi, there was a lot of craze for football in our school hostel. Our school team used to play local school football tournaments and there were 2-3 senior players who were really good.

They used to play for the Simla Youngs Football Club which is a local club in Delhi and they used to take the players abroad for tournaments. So, in our school, they were getting awards in the assembly, so from that time I thought that, yes, I want to play football and want to go abroad like them. And then my football journey began.

Ever since I started following football, I wanted to be like Manuel Neuer and Edwin Van der Saar. Both are great goalkeepers and I like the way Manuel Neuer plays and his style of game.

Tell us a bit about where you are studying, the support from the school/ colleges and how well you able to manage both – as playing football competitively must have been quite challenging? How did and are you coping?

Last year I completed my graduation from SOL, University of Delhi. It was very challenging during my younger days. After school each day, I used to rush to the hostel and get ready very quickly to go to training. I used to return at 10 in the night and then would have to prepare my things for next day’s school, wash my kits for the next day and then need to complete my homework. My school coach Sunil Patwal sir had a good reputation in school, so he ensured that everything with me is a bit easier by talking to the principal and teachers. My coach and school have supported me a lot. I will be always grateful to them and will never forget those days.

Goalkeeper is a position often seen as a maverick role, a bit like the drummer in a band! What do you think it was that drew you to goalkeeping in particular?

Since I started watching my seniors in my school, one of them was a keeper and I loved to watch him dive and make saves. Later I came to know that the keeper is a person who can watch every movement of the ball, game, and every player on the pitch. A lot of things depend on the keeper and can change the place of the game. All these influenced me to become a keeper.

Read: Ayush Adhikari - “I always work hard not to meet my expectations but to exceed them”

I am a sweeper keeper. I like to play with my feet and love to play in an advanced position, so that I can enjoy myself and make more moments on the field. I would not compare myself with anyone. I always wanted to be a better version of myself.

Yes, such things happen sometimes, but I always look back to my life and say to myself that I have worked so hard to reach where I am now. I tell myself it’s not the end and I need to work harder. I know patience is the key. I analyze myself and I work on to improve myself each day. I think, biggest motivation to reach the goal is to keep myself motivated.

Who has had the biggest influence on your football career?

There are many people, I always thanks to each and every person whom I have met in my journey so far. In some way or the other, everyone has helped me a lot. But the biggest support system was my family, school coach and Noushad Moosa sir. When I joined Pune FC U-19 under him, he trusted me and I was able to perform well under him. Then Roger Lamesa Grau, all the support staff at FC Pune City and Gaurav Modwel who was the CEO of the team.

It is Subrata Paul, I have been following him since I started playing football and I remember the first India game I watched at the Ambedkar Stadium Delhi. It was the Nehru Cup and he was superb. I like his way of living; he believes in working hard.

It was the semi-final of the IFA Shield against the AIFF Academy team. Since I was at the Academy for some time, I always wanted to face them and win against them. It was a 1-1 draw in the game and it went to penalties. We won and I saved two penalties, I was so happy my team’s coaching staff were all delighted because we were all wanting to play the final. In the end, we won the final.

My highest achievement is the U-17 SAFF Championship. We won the SAFF cup in Nepal by beating the home side in the finals.

I think, I have never been under pressure during penalties. I try to read the player who will take the penalty and move to the side where I think he is going to shoot. I always try to be focused with my eyes on the ball & on the ankles of the player. It is very clear for me, I just need to save the penalty, so my complete concentration will be on it.

I know my journey has just begun, now there is a lot more to achieve. Obviously, I want to be the best in the country and play for the national team. But my main goal is to keep working hard each day and achieve small goals to improve myself, and everything will arrive if I work hard.

Which player in history would you like to play alongside? Messi

Your favourite pair of football boots ever and what do you wear now? Nike mercurial and I wear Mercurial now.

Say I wanted to become a footballer myself, what 3 things would you tell me that I should take as advice? Hard work , Determination and Consistency

From the players you have played against, who was the toughest opponent you have faced? Anelka