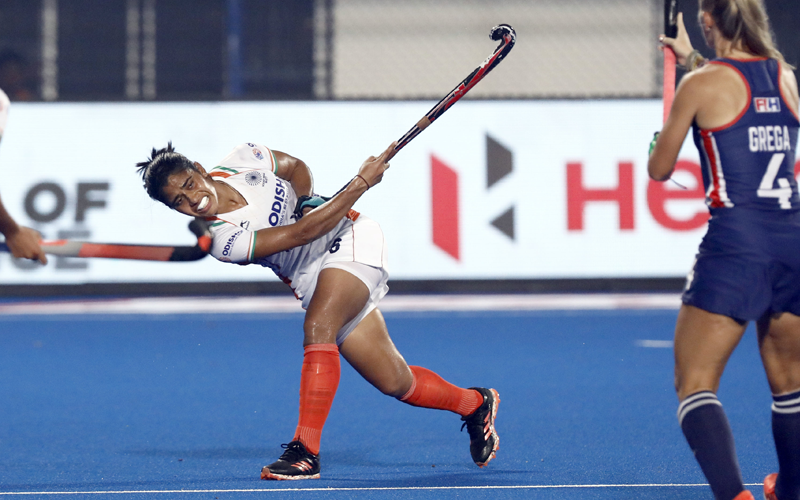 Despite two surgeries to her left eye in 2019, Reena's determination and hard work brought her back into the team.

A freak mishap during a gym session in April last year would have ended Reena's career but her will to fight the uncertainty made it possible for her to wear the India jersey again.

"I was using a stretch-band to do some simple flexibility exercise when the band snapped and hit my left eye. It happened so quickly that I had no time to react. At that time, little did I know that the next four months would be the worse phase of my life," recalls Reena, who made her India debut against New Zealand in 2017. Reena, a midfielder with exceptional defensive skills, was regular feature in the Indian squad since she made her debut in 2017. She was part of the Indian team that won the Silver medal at the 2018 Asian Games and also played the FIH Women's World Cup earlier that year.

Her progress in the team was steadfast until the mishap in 2019 which cast a doubt on whether she can be ready for the all-important Olympic Qualifier later that year. "Initially the doctor has said it will heal soon but even after a month when the pain was persistent, the doctor then advised surgery to rule out permanent damage to the retina. This news was devastating and all I could think of was whether I will ever play hockey again," stated 26-year-old Reena who is from Chandigarh.

After a brief break, Reena returned to the National Camp in July. "I was advised two months bed rest and when I returned to the camp Chief Coach Sjoerd would talk to me regularly to pep me up. He would tell me about a player in Netherlands who played hockey with vision only in one eye. Positive stories like these and emotional support from my parents and some close friends outside of hockey kept me motivated. When I held the stick again, after almost three months, I knew I would do anything to return to the team and I am thankful to the Coaching Staff who supported me with step-by-step return to full training and didn't put any kind of pressure," she expressed. To the surprise of many, Reena was available for FIH Olympic Qualifiers selections as she had made her comeback in the Test Event held in Tokyo in August 2019 where India was victorious. Though in December, she went through another corrective surgery, the danger had passed and Reena now vies to make best use of this year to earn a place in the Tokyo-bound Indian Team.

"I got a break in the Indian team quite late. I was around 24 when I made my India debut and my junior India experience is less, so the next one year I will do everything I can do prove myself worthy of a place in the Olympic-bound India squad," an optimistic Reena said.