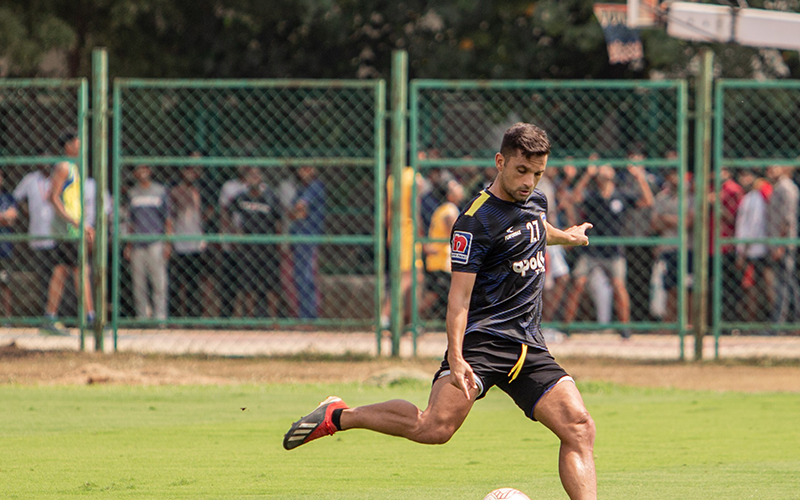 Chennaiyin FC's 33-year-old Maltese forward Andre Schembri on Monday announced that he will retire from professional football after the Hero Indian Super League final against ATK FC on Saturday March 14, 2020.

The well-travelled former Malta international with 94 caps to his name has decided to call it a day, announcing the same through his official social media pages. And he will be aiming to go out on a high, hopefully lifting his first and CFC's third ISL title. Schembri has been an integral part of Chennaiyin's success this season with five goals and three assists to his name going into the final showdown against ATK next Saturday.

"After thirteen years dedicated to professional football overseas, I feel it is the right time to announce my retirement and focus on other aspects of the game," Schembri mentioned in his official statement.

"I am proud to have had such a fantastic journey across Europe and Asia. It is not easy to leave such a small island like Malta to try and break through professional football," added the versatile forward who has played club football in Germany, Austria, Hungary, Greece, Cyprus, Portugal during a memorable journeyman career before arriving to India and Chennaiyin this season.

A role model and Maltese sporting icon, Schembri has attained fan-favourite status among the Chennaiyin faithful, touching a chord with them through his selfless style of play coupled with heart-warming goal celebrations. It was Schembri who scored CFC's first goal of this season under dramatic circumstances against Hyderabad FC, sending the Marina Arena into raptures. And his famous clown celebration has won many hearts with Schembri revealing it is for a noble cause called Dr. Klown that he supports back home in Malta that aims at spreading happiness and cheer among ailing children and youngsters in hospitals.

"I'll be forever thankful to the backroom staff, teammates, coaches, and all the teams I've played with for the faith they have shown in me. My immense gratitude goes to my entire family and my closest friends for their continued encouragement and commitment to seeing me succeed, wherever the ball led me," said Schembri, who is also the first Maltese player to score in the proper rounds of a UEFA competition when he netted in the UEFA Europa League for previous club Apollon Limassol in Cyprus. Moreover, he's also the first Maltese player to grace the ISL and score.

Along with his contributions in matches, Schembri's experience has provided a lot of insight and learning to his teammates, especially the young Indian players. And his aim will be to step out one last time as a player and contribute in the big ISL final on March 14.

"I am filled with many emotions right now - pride, sadness, but most of all, excitement to play the FINAL match of my career. Chennaiyin, I will give my all to bring the cup back to where it belongs!" said a determined Schembri, who comes from a long line of footballers with his father, grandfather and uncles having represented Malta at the highest level. Incidentally, Schembri announced his retirement from international football in November 2018 after amassing an amazing 94 appearances in what has been a stellar career.

"I've been fortunate to have played, coaches and managed some wonderful players and teams at the highest level, and I can safely say Andre Schembri exemplifies everything you'd want in a footballer. An outstanding professional, prepared to sacrifice himself at times for the team. He's a great talent who's had an outstanding career. I wish him well for the future. But our final wish is for his last game to be as a champion. Hopefully we can win the final against ATK and give him a perfect send-off," CFC Head Coach Owen Coyle shared his thoughts on Schembri's farewell as a footballer.

Everyone associated with Chennaiyin FC would like to congratulate Andre on a fantastic playing career and wish him well in his retirement and future endeavours. Moreover, everyone would like to thank him for his services and hope he departs on a high of lifting the ISL title wearing Chennaiyin colours.