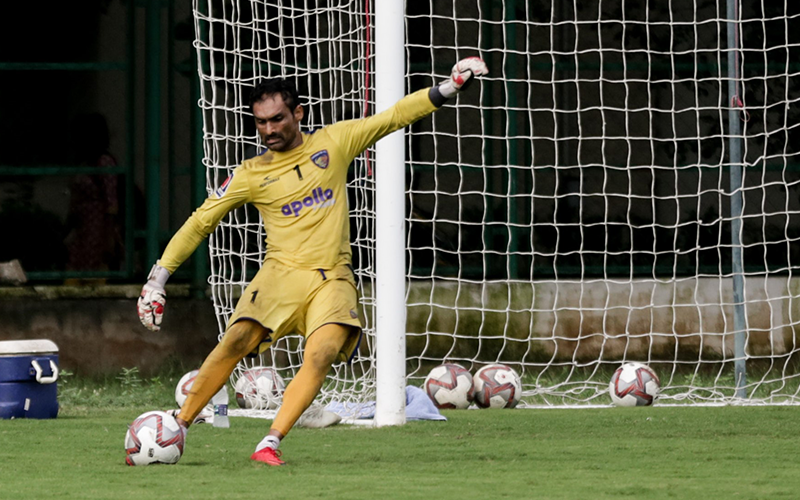 Chennaiyin FC on Saturday announced that goalkeeper Karanjit Singh has extended his stay at the club till the end of the 2020-21 season. The 34-year-old is set for a sixth consecutive campaign for the Marina Arena side, having won the Indian Super League twice with the club in 2015 and 2017-18, starring especially in the second triumph.

Having donned the dual role of goalkeeper-cum-goalkeeping coach last season, experienced custodian Karanjit will continue in a playing capacity in the upcoming campaign; as new head coach Csaba László is expected to bring in a goalkeeping coach as part of his backroom staff.

“Chennaiyin FC is my home. I didn’t have to think twice before taking the decision to continue with my adopted family and represent our loving fans and the city of Chennai for one more season. I would like to thank CFC for continuing to have faith in me, and I look forward to contributing to the best of my ability as we aim for a third ISL title in the coming season,” said Karanjit, who is CFC’s sixth-highest appearance-maker with 62 caps in all competitions so far.

“Karanjit is a pivotal member of our goalkeepers’ union. I am very happy that we will continue to benefit from his experience and expertise. He has been a big part of Chennaiyin’s success and there is great mutual respect between him and the club. Karanjit’s valuable input in training sessions and match situations will be of immense importance, especially for our younger goalkeeping talents. He will bring the much-needed winning mentality to our ranks, having lifted the ISL trophy twice already with CFC,” said Chennaiyin head coach Csaba László on the former India international’s contract extension.

Karanjit’s performances for Chennaiyin stood out especially in CFC’s 2017-18 title winning campaign with seven clean sheets in 20 games, the joint-highest that season. He also made two remarkable penalty saves in games against Jamshedpur FC and Kerala Blasters FC that season, which proved instrumental in CFC’s eventual title triumph.

The following year, Karanjit came into his own with stellar displays in the Super Cup and AFC Cup matches, registering seven clean sheets in nine games over a two-month period in March and April. His contribution was massive in Chennaiyin’s charge to the Super Cup final. Karanjit also captained CFC for the first time, in the 2-2 draw against NorthEast United in Guwahati last season.