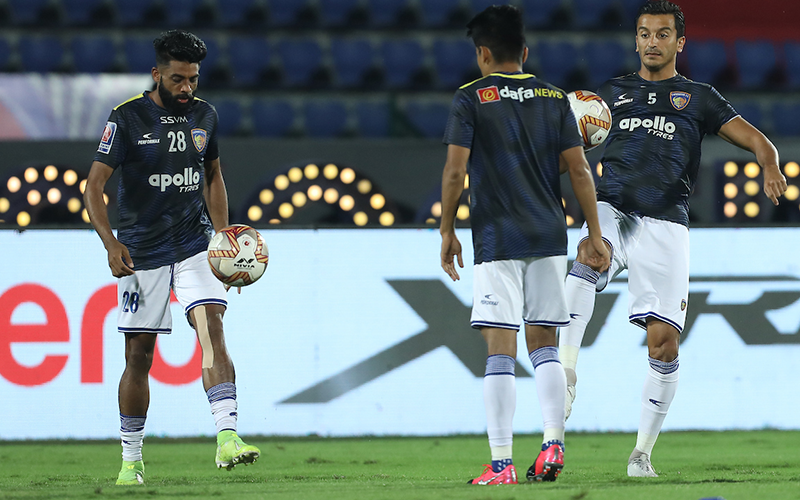 Old enemies get reacquainted on a mild Marina evening.

Indian Super League semifinal kicks off with a banger, as FC Goa travel to the new-look Chennaiyin FC looking to consolidate bragging rights in the 1st leg semi-final.
Owen Coyle looks to reestablish Marina Machans as the kings of knockout, while Clifford Miranda is intent on ending ISL title duck as well. With both sides looking for emphatic starts, this should be a slobber-knocker.
Both teams head into this fixture in a rich vein of form and that makes the encounter even more promising.

Chennaiyin have been in formidable form since Owen Coyle took charge and they turned fortunes with an eight-match unbeaten run, winning six of them, to end their league stage campaign. Goa have won their last five matches to finish on top of the league table with 39 points from 18 matches.

Rafael Crivellaro and Nerijus Valskis have been in scintillating form for the home team and the duo has scored 20 goals and 11 assists between them. FC Goa's defence must remain on their toes to contain their attacking impetus.

“Chennaiyin is the most difficult side in the play-offs. It is one team we would have wanted to avoid. They are the most improved side in the league. They are a team that is unbeaten in the last eight games with six wins and two draws. It is going to be difficult for us. But we will play our natural game,” said Goa interim coach Clifford Miranda.
It will be an interesting battle at the centre of the park as Anirudh Thapa and Edwin Vanspaul will be tasked with the responsibility of keeping a check on Goa's enterprising midfield comprising of Ahmed Jahouh, Hugo Boumous and Brandon Fernandes.

Boumous has been on fire and has been the primary orchestrator for Goa. His vision to find the perfect pass for Ferran Corominas upfront coupled with his own knack of scoring goals at critical junctures makes him one of the most dangerous players on the pitch.

There will be no shortage of pace on the flanks as both the teams have express wingers who do not hesitate to burn their pace while running into opposition defense. Lallianzuala Chhangte will cross paths against Jackichand Singh and a lot will depend on the amount of defensive workload the wingers put in to nullify each other.

Another mouthwatering individual battle will be fought between Lucian Goian and Corominas. The Spaniard has had the last laugh on most occasions and the defender will be eager to amend the records by helping Vishal Kaith to maintain a clean sheet.

“Having got here (play-offs), we want to see it through. But we are playing against a quality side with good coaches. But we have shown that we can go toe-to-toe with any team.

“Both defenses will have a huge part to play. When you look at it, both forward lines, the attacking midfielders and the central midfielders are fantastic players. The forwards are at the top of their game, they can win games in an instant. That puts a huge onus on how we defend,” said Chennaiyin coach Owen Coyle.

The two sides will not hold back their punches and given the stakes involved one can expect a high-intensity affair to unfold in the opening play-off encounter.