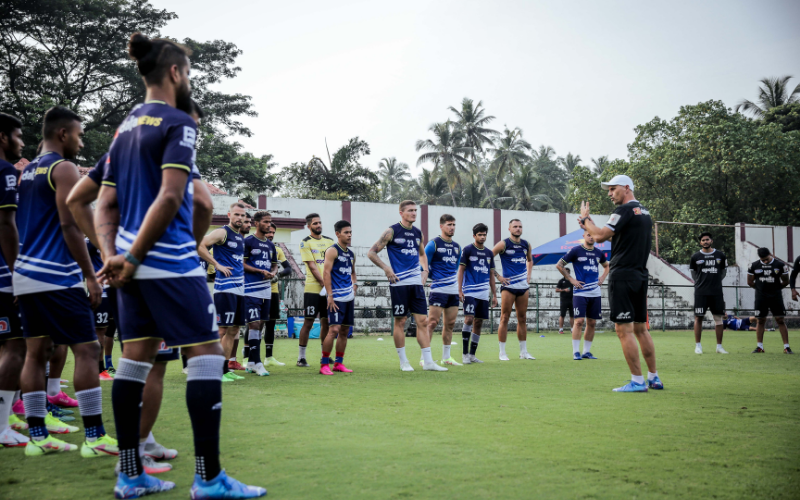 Press Release
Share
Having kickstarted their campaign with a win, Chennaiyin FC will look to carry forward the momentum when they take on NorthEast United FC in their second 2021-22 Hero Indian Super League match at PJN Stadium in Fatorda, Goa on Monday.
"It is very important for mentality and confidence if you start [the campaign] with three points. We know that we need to be, like we said, better in attacking and need to win many duels. We need to be stronger there. We have confidence and we know what we can do," said Chennaiyin FC head coach Bozidar Bandovic while addressing the media during a pre-match press conference on Sunday.
The two-time ISL champions registered a 1-0 win against Hyderabad FC in the opener earlier last week with Vladimir Koman scoring from the spot.
The man of the match Koman, who accompanied the head coach in the press conference, said the victory in the first match boosted the confidence of the players. "I hope this first win gave confidence to the players. It's always nice scoring in the first game but especially if you score and your team win [then] it's like double satisfaction," Koman said.
"I believe that in the second game, we will go with confidence and are going to improve because I have seen my team in friendly games, I know what we can do. Of course, we respect our opponents, but we know what to do in the field," the attacking midfielder further added.
Though NorthEast United are yet to open their account in the on-going season, Bandovic is aware about the challenges of the next game and doesn't want his team to take anything lightly.
"For me there is no easy game. They [NorthEast United] did very well last season. You have to prepare yourself mentally and the players need to concentrate in full discipline in every game. Everything can be dangerous if you let them be dangerous. You make it easy the way you approach the game and how you play," Bandovic said.
Chennaiyin FC will be without their experienced midfielder Rafael Crivellaro, who will be out of action for the next four weeks due to a muscle injury. However, the head coach believes that every player in the side has an important role to play.
"Rafa [Rafael] is an important player. We need to help him to recover as fast as he can. As I said in my interviews before, my team don't depend on one player and I will keep saying the same thing. We need to keep working without him. Everybody's role is important and they know what they need to do [for the team]," the Montenegrin concluded.
The last encounter between Marina Machans and The Highlanders, played during the last season, ended in a 3-3 draw with Lallianzuala Chhangte scoring an impressive brace. The teams have played 14 games against each other in the league so far with Chennaiyin FC winning on three and NEUFC on six occasions.Head-to-Head:Chennaiyin FC vs NorthEast United FCMatches: 14, CFC: 3, NEUFC: 6; Draw: 5Goals: CFC: 21, NEUFC: 25