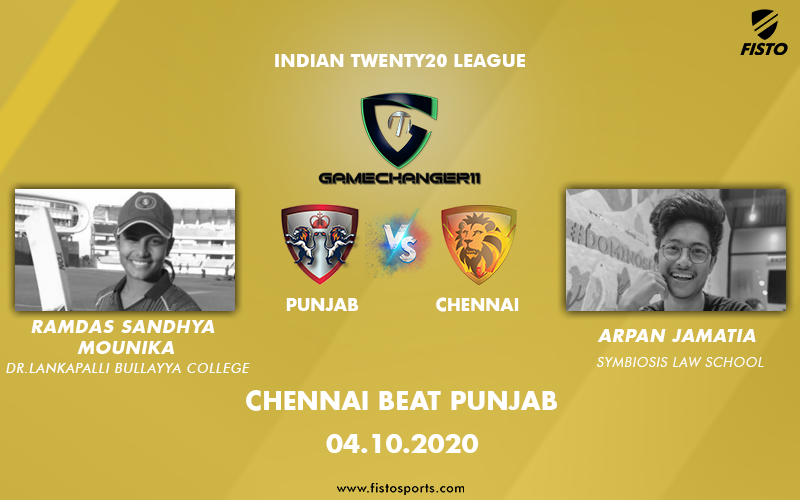 Chennai Super Kings (CSK) scripted a majestic victory over Kings XI Punjab (KXIP) and set their campaign back on track. Chasing 179, CSK dominated the entire innings and absolutely crushed KXIP after a brilliant opening partnership display. This loss for KXIP would certainly make them a little wary about their position in the tournament and execution of plans as mentioned by KL Rahul in the post-match interview.  Though it's still early days, it's high time KXIP pull up their socks, if they have to qualify for the playoffs. With the firepower, their squad possesses and with the depth of coaching staff, it's honestly a little sad and disappointing to see them at such a precarious position. KL Rahul has once again led the team from the front and it seems like notching up half-centuries and big scores are a regular thing for him. Another day, another big inning!

This really was a very important game for both teams as both of them had quality batsmen and bowlers but were languishing at the bottom of the table. KL Rahul's KXIP looked invincible at the starting of the tournament and it's tough to believe that they are at position 7 of the points table. Having both the leading run-scorer and leading wicket-taker in their team, Punjab would be absolutely disheartened with this shambolic bowling performance today. This win for CSK would certainly raise the morale in their camp while KXIP would be high on alert and further slumping would eventually make things difficult for them to qualify.

The skipper of KXIP, KL Rahul has been in ominous touch in this tournament. Having scored 246 runs before this match, KL Rahul was comfortable at the second position in the highest run-scorers list in this IPL. After a slight dull outing in the previous match, KL Rahul shone back to hog the limelight as he scored a fluent and classy 63 of 52 deliveries. His innings was peppered with 7 fours and 1 six. Interestingly this fifty was also KL's slowest half-century in this IPL which proves the fact that he can accustom all sorts of situations and can play any role, anchor, or big-hitter. What consistency! Grabs the first position in the leader board of highest runs with class. It seems KL Rahul likes captaincy and loves to thrive under pressure. That's the thing about champions. Champions can accustom very quickly and adapt to all sorts of situations and roles. A true role model!

A lot was there to prove for the CSK openers. One of the main reasons why CSK has failed to hunt down targets is because of slow starts by the CSK opening pair. This has to be rectified. Shane Watson, one of the finest all-rounders of all time has been given an extended go by CSK even after repeated failures at the top order. He kickstarted proceedings for CSK smashing Sheldon Cottrell for a couple of fours in the first over itself. There was definitely a lot of intent and positivity from the Australian opener today. The young Harpreet Singh impressed with his one over in the powerplay where he hit the right lengths and conceded only 7 runs. While Watson was looking at an aggressive mood in the powerplay, Faf Du Plessis played as an anchor. Top-notch strategy from CSK and they're off to a pretty good start.

Scoring 60 in the powerplay, CSK looked all set to register their second win of this season. This was their highest powerplay score in this year's IPL. Their previous highest was 53 against RR in Sharjah when they were chasing a huge, imposing total.

The Chennai dugout would be brimming with confidence and positivity. Their machinery has finally been oiled and is it the start of the resurgence of CSK? We all know what a champion side CSK has been and what a champion captain MS Dhoni has been in the previous years. Watson playing the role of a hitter while Faf Du Plessis playing the role of a sheet anchor. This has been a perfect dream start for CSK.  Half-centuries from both the players and both of them silence all the haters who were commenting on CSK's slow start in the IPL which had cost them 3 out of 4 games. This is really good intent from CSK and they're looking very positive!

After a string of low performance, Shane Watson needed an innings like this as a confidence booster. In fact, CSK needed a game like this to set their campaign back on track. A mammoth win, a gigantic one, a magical one. Scoring 83 of just 53 deliveries, Shane Watson was just in a different world today. That's just what CSK wanted today. Exceptional batting. Hitting 11 boundaries and 3 sixes, Watson reminded us cricket fans of the 2010 T20 World Cup where he single-handedly almost won the cup for Australia.

We had an exclusive conversation with Ramdas Sandhya Mounika of Dr. Lankapalli Bullayya college and he predicted that Gayle might instead of Nair. Unfortunately, we couldn't witness a Gayle storm as he was not picked in the playing 11, but Mandeep Singh was picked ahead of Karun Nair following his dismal performances with the bat in the previous games. Once again KL Rahul shone with the bat and displayed his class which was combined with little power today as we saw a completely different KL Rahul today

We had an exclusive conversation with Arpan Jamatia of Symbiosis Law School (SLS) Pune and he opined that the MS Dhoni-led Chennai Super Kings will definitely look for a comeback as they did not have their usual start this season. CSK has been one of the most successful teams in the history of IPL winning three titles which include the record for most appearances in the final of the Indian Premier League (eight). However, this season CSK team's middle-order looked in a bad shape after Suresh Raina's departure from the team earlier this season.

CSK started this season winning their first match against Mumbai Indians but sadly they lost the next two matches which placed them at the bottom of the table. Nevertheless, the team is looking for a comeback as Ambati Rayudu will be back in the team and the mastermind Mahendra Singh Dhoni will be looking for a better bowling attack, good middle-order batsmen, and a better opening partnership to help his team win the match this time as they face the Kings Eleven Punjab. The opening batsmen looked out of form, so there is a plausibility of replacing Murali Vijay with Ambati Rayudu. Also, there is a plausibility of including Dwayne Bravo in the playing 11. Lastly, CSK with a team of experienced players are looking forward to making a comeback after learning from their mistakes in the early matches of the season, and the only way to defeat KXIP is to have a better bowling attack with proper slow deliveries, good placements of the field and an early breakthrough because the opening pair of KXIP which includes Kl Rahul and Mayank Agarwal is in an excellent form as they both scored centuries in their early matches of this season.

Man of the Match: Shane Watson

Will CSK qualify for the Play offs?