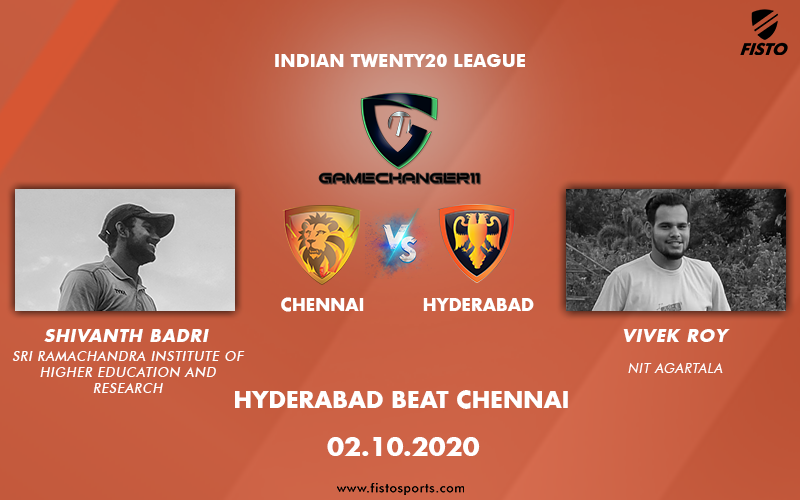 The Chennai Super Kings dropped their third straight game to start the season, as they lost to Sunrisers Hyderabad, by 7 runs.

The youngsters of Sunrisers Hyderabad raised their hand when needed and took them to a tight win over Chennai Super Kings. With two back-to-back wins in last two matches SRH now joined six more teams on 4 points and currently are in the fourth position based on the Net Run Rate. This is CSK’s third consecutive loss, a rare event in the history of IPL and now they are firmly in the 8th position with a Net Run Rate of -0.719. MS Dhoni and team need to find the winning formula soon enough to bring themselves back in the winning ways.

David Warner won the toss and decided to bat first. They played an unchanged eleven after the success of the last match. However, Jonny Bairstow did not survive for long and was dismissed by Deepak Chahar in the first over. Warner and Manish Pandey recovered the innings somewhat but could not accelerate much. Pandey was dismissed by Shardul Thakur, one of CSK’s three new players today. The other two were Ambati Rayudu and Dwayne Bravo. There was a mini collapse for SRH when they lost Warner and Kane Williamson on consecutive deliveries in the 11th over. Piyush Chawla dismissed Warner while trying to play big shot and Williamson was run out due to a poor call from the new batsman Priyam Garg. With SRH struggling at 69/4, it looked like CSK will take control of the match. But eventually Garg and Abhishek Sharma took control. The young duo batted beautifully and added 77 runs in next seven overs. Sharma set the pace and scored a 24-ball 31. Garg was slow to start but then he also picked up. He played some brilliant shots to score his maiden IPL half-century. Eventually he remained not out ofn51. His 26-ball effort included six fours and one six. He and Abdul Samad took SRH to 164/5, par score in this ground.

CSK had a slow start and could add only four runs in first two overs before Shane Watson was dismissed cheaply once again by Bhuvneshwar Kumar. The Australian scored just one run off six deliveries he faced. Ambati Rayudu came in next after recovering from his injury but did not look too settled. The SRH hero from last match, T Natarajan created enough issues for him and finally got him bowled for just eight runs. Faf du Plessis started brightly but he was also runout by a brilliant effort from Garg and Bairstow. And When Abdul Samad got his first ever IPL wicket to dismiss Kedar Jadav for just three, CSK looked in even bigger trouble at 42/4. MS Dhoni and Ravindra Jadeja tried to build a partnership but could not score first and at one stage they required 78 runs off last four overs. Some good hits from Jadeja off Bhuvneshwar ensured a good recovery but once Jadeja reached his fifty he was dismissed on next ball while clearing the square leg boundary. It was Natarajan’s second wicket of the day and he continued to impress. There was some late drama, as Bhuvneshwar Kumar got injured after bowling one delivery in the 19th over. He could not continue and had to walk off the field. This messed up Warner’s calculation and he decided to let Khaleel Ahmed finish the over and Samad to bowl the last over. Dhoni also looked exhausted and could not play enough big shots in the 19th and the 20th over. He remained unbeaten on 47 and Sam Curran remained unbeaten of 15 with two big sixes as CSK lost the match by just seven runs.

Vivek Roy from NIT Agartala shared his thoughts regarding SRH before the match. Although he suggested SRH to chase the total keeping in mind the dew factor, but it was not that evident and SRH won despite batting first. However, he was right in his assessment that SRH needed early wickets to ensure that the CSK big guns like Watson and du Plessis are back on the hut sooner. In reality, those early wickets did ensure that SRH won despite putting just the par score at the venue.

Shivanth Badri from Sri Ramachandra Institute of Higher Education and Research shared his plan for CSK before the match. He rightly pointed out the weakness of CSK during bowling and middle order batting. As suggested by him, CSK required one of their top order batsmen like Rayudu or du Plessis to play a long innings and failure to do that was the key reason for their loss. He also highlighted the drop catch issue due to the lighting the Dubai Sports City stadium and there were quite a few drop catches for both the teams.