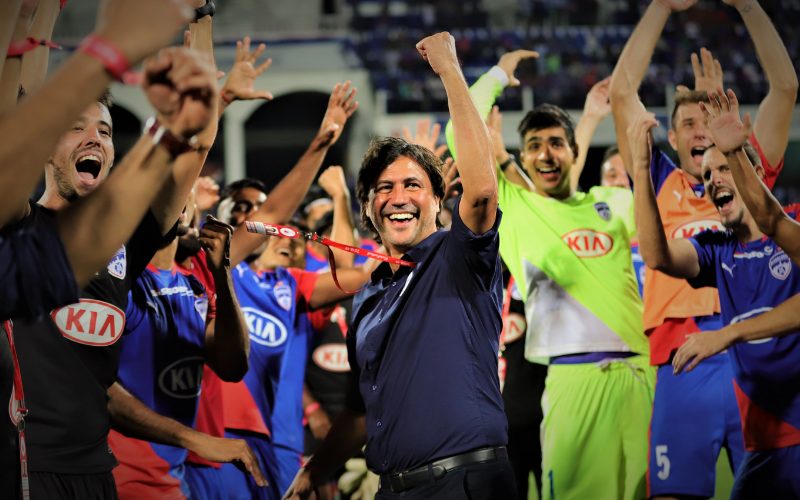 It's all over for Carles Cuadrat at Bengaluru FC. The former champions — it was Cuadrat who guided them to the title —  took a bold call on Wednesday by deciding to part ways with the Spaniard. Interim coach Naushad Moosa is set to take over.

The decision by the management comes after the Blues suffered a comprehensive 1-3 defeat against Mumbai City FC. They were not only beaten but outplayed. The result also meant that Bengaluru lost three successive games for the first time in their history. Before going down to Mumbai, Bengaluru had also failed to score in two consecutive games for the first time ever.

But the cracks had been evident for Bengaluru since the start of the season, having bagged just 12 points from 9 matches this season. Last season, BFC ended third in the league despite scoring only 22 goals in 18 matches. The lack of creativity was a major concern as they struggled to score from open play. More than half of their goals came from set-pieces (14). But what aided them was a solid defensive unit that shipped just 13 goals from 18 matches, registering 11 clean sheets in the process.

This season, even that defensive prowess appears to have deserted them. They have conceded 12 goals, one less than last season's tally and have kept just two clean sheets. Only the bottom three teams – East Bengal, Kerala Blasters, and Odisha FC – have conceded more. Seven of those goals came after the 60th-minute mark, perhaps a sign of their backline's inability to deal with pressure.

Injuries did not help Cuadrat's cause either. An injury to makeshift left-back Ashique Kuruniyan against Odisha further worsened Bengaluru's defensive crisis. Kuruniyan's pace and trickery on the left flank were missed with Cuadrat choosing to place his trust in the experienced Rahul Bheke over natural left-back Ajith Kumar in that position. Pratik Chaudhari took up Bheke's role in central defence but is yet to settle in.

Upfront, Blues have appeared disjointed in attack and have struggled to create chances from open play once again. Nine of BFC's 12 goals this campaign have come from set-pieces, emphasizing their dependence on dead-ball situations. A major reason for this has been the failure to replace a striker of Miku's caliber. The Venezuelan was instrumental for the Blues when it came to both scoring goals and creating chances. In contrast, forwards Deshorn Brown and summer signing Kristian Opseth are yet to net a goal this season while captain Sunil Chhetri continues to shoulder the burden upfront. Just like last season, the talismanic striker remains Bengaluru's leading scorer, having netted four goals this campaign.

Cuadrat may have gone but the issues that plagued his reign remain. Bengaluru will not have much time to address these issues as they face SC East Bengal on Saturday. They will have to find solutions by hook or crook if they are to remain alive in the race for the playoffs.