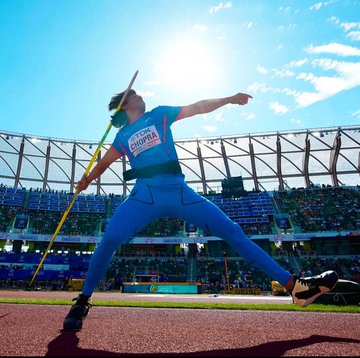 At the recently concluded 2022 World Athletics Championships, he had claimed silver with a throw of 88.13m. Chopra competed in the finals with strapping on his thigh owing to a groin injury. It is learned that Chopra has been advised a month’s rest. Chopra previously missed out on the entirety of the 2019 season due to an elbow injury which eventually needed surgery. Chopra is the second Indian to win a medal at the Worlds, after Anju Bobby George’s bronze in 2003.

“Team India javelin thrower Mr. Neeraj Chopra called me earlier today from the US to convey his inability to take part in the Birmingham 2022 Commonwealth Games owing to fitness concerns,” IOA secretary general Rajeev Mehta said. “Following his participation in the 2022 World Athletics Championships in Eugene, Mr. Chopra had an MRI scan done on Monday, and, based on it, he has been advised a month’s rest by his medical team.”

It is learned that Chopra underwent an MRI following the final of the World Championships where he was diagnosed with a grade 1 strain. The injury is expected to need a rehabilitation process of between 15-20 days. With the javelin throw event at the Commonwealth Games featuring both a qualification and final round, Chopra was unwilling to risk aggravating the injury owing to a busy season that includes the Asian Games and World Championships next year. Chopra informed the IOA since he was expected to be the flagbearer of the Indian team for the Commonwealth Games.

The injury diagnosis does not necessarily mean the end of the season for Chopra. One of his goals at the start of the year was to compete in the Diamond League finals in Zurich on September 6. Assuming his rehabilitation proceeds smoothly, Chopra will be expecting to compete there.

I’m extremely disappointed to inform you all that will not be able to represent the country at the Commonwealth Games in Birmingham. I had been feeling uncomfortable after the pull felt in my groin during my fourth throw at the World Championships. On having it investigated medically yesterday by a group of doctors here in the US, a minor strain was discovered and I have been advised to undergo rehabilitation and give it rest for the next few weeks,” Chopra said in a statement on his social media late on Tuesday.

“I have discussed this with my support team and the 10A, AFI and SAI’s CAIMS, and we’ve collectively decided that keeping my long-term goals in mind, it would be best for me to skip the CWG in order to avoid risking any further aggravation of the injury,” he said.

“Needless to say, I am hurt about not being able to defend my title and missing out on another opportunity to represent the nation. I am especially disappointed about losing out on the opportunity to be Team India’s flag bearer at the opening ceremony, an honour was looking forward to having in a few day’s time,” the World silver medallist wrote.

“For now, I will focus on my rehabilitation and hope to be back in action very soon. I would like to thank the entire country for all the love and support I’ve received over the past few days, and urge you all to join me in cheering on my fellow Team India athletes in Birmingham over the coming weeks,” he added.

Chopra has been in terrific form of late. An 89.30m throw in the Paavo Nurmi games set a national record. He followed it up with a win in the Kourtane Games four days later, with an 86.69m throw.

The 24-year-old then featured in the Diamond League in Stockholm, where, with a throw of 89.94m, he broke the national record again.