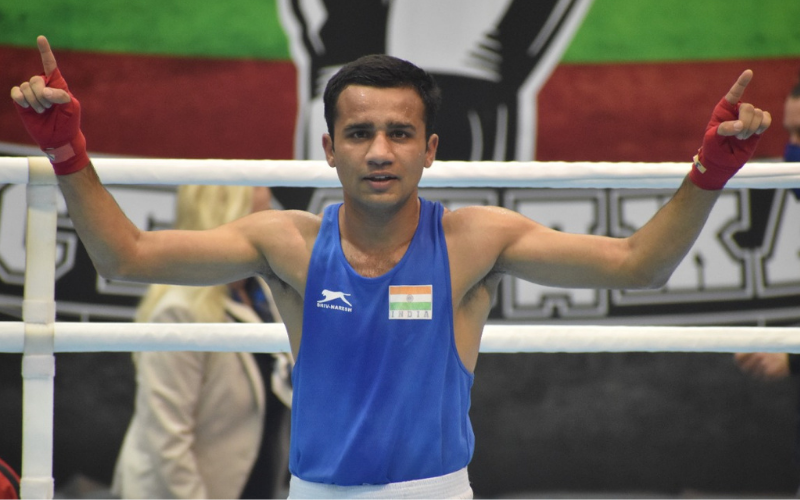 Fisto Staff
Share
Led by Deepak's fluent show, Services Sports Control Board (SSCB) boxers produced an impressive all-win performance on the second day at the 5th Elite Men's National Boxing Championships at the Inspire Institute of Sports in Bellary, Karnataka on Thursday.
Deepak, who had upstaged the world and Olympic Games champion Shakhobidin Zoirov of Uzbekistan during his silver medal show at the Strandja Memorial earlier this year, started the domination for SSCB with a flawless 5-0 win against Bihar's Aman Kumar in the 51kg opening round match.
Barun Singh (48kg) and Akash (54kg) further extended SSCB's winning momentum as they managed unanimous victories against Telangana's Donald Janumala and Rocky of All India Police respectively.
Dalveer Singh Tomar (64kg) and Naveen Boora (71) were the other two boxer to progress into the second round as all the five SSCB boxers in action emerged victors on second day of the prestigious event which has been witnessing a participation of close to 400 boxers from 35 states/UT units and boards.
Meanwhile, in the 67kg, Karnataka's Rayyan MD also made his way into the second round as he defeated Delhi's Bhupesh Ruhal by 4-0 margin.
Maharashtra pugilists Ajay Pendor (51kg) and Yash Goud (64kg) too made winning starts to their campaigns as they outpunched Manipur's Irabot Heigrujam and Sailem Malik of Ladakh respectively in their opening round bouts.
Among other pugilists who entered second rounds were Uttar Pradesh's Javed (51kg) and Chandigarh's Rohit Kumar (64kg). While Javed got the better of Assam's Manuj Thakur in a 4-1 win, Rohit's attack forced referee's to stop the contest and declare him the winner with RSC verdict against Gujarat's Arvind Thakor.
Playing in the 71kg, Rajasthan's Jaivardhn Kasnia also progressed into the second round after a 4-1 win over Gujarat's Mohammed Moin Shaikh as 75 bouts took place on the second day of the event.
The gold medallist of the ongoing championships, which will go on till September 21, will earn themselves a berth in the upcoming 2021 AIBA Elite Men's World Boxing Championships which is scheduled in Belgrade, Serbia from October 24 to November 6.
The gold and silver medal winning boxers of each category from the Championships will earn themselves direct entries into the national coaching camp. The National Championships will be followed by selection trials, which will be played till September 24 to finalise the remaining two participants in the national camp.
In the selection trials, two bronze medallists of the Nationals will compete alongside the boxers representing the second team of Top-3 teams from the 2019 National Championships—SSCB, RSPB and Haryana. The announcement of the remaining two names for the national camp will be made on September 24 on the basis of results of the selection trials.