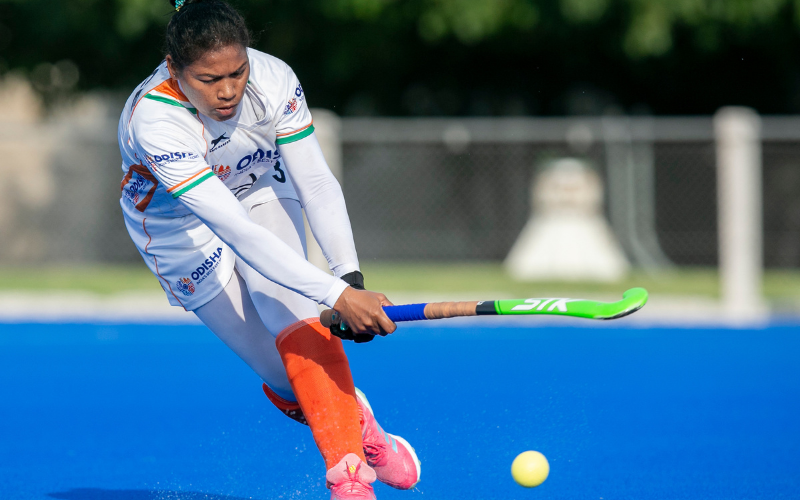 Deep Grace Ekka: 'Tour of Argentina and Germany has provided valuable inputs about our game'

The experienced player feels the two tours has helped them understand their abilities against the world's best teams.

The Indian Women's Hockey Team's recent tours to Argentina and Germany respectively has been crucial in their preparations for the Olympic Games, feels experienced defender Deep Grace Ekka. Playing against world-class teams that have very unique playing styles has provided the Indian team crucial insights into their own game and has helped them define the areas that need attention in the lead up to the Tokyo Olympic Games. Grace said, "Playing against Argentina and Germany, both highly ranked in the world, with very different and unique playing styles has been very helpful in planning the areas we need to improve in the days leading up to the Olympics."

"World no.3 Argentina plays man-to-man, and their style is quite conventional. Personally, for me, playing against Germany was quite intriguing because of their style and attacking game. There was a lot to learn about how the German players communicate on the field and how they create space in pursuit of circle entries. Their attack is aggressive, they are quick and think on their feet."

Grace feels this experience against Germany will help them take on world no.1 Netherlands in their opening match at the Olympic Games. "I felt that Germany and Netherlands have very similar style. They tackle two-on-one and the way they attack is very similar. I feel we have gained a lot of confidence playing against Argentina and Germany. We have no inhibitions or fear in our mind when we play these top teams now and another key element has been our fitness. We don't tire easily anymore and that will help us bounce back in the game and finish well even if there are early setbacks," she said.

Another take-away from the recent tours is the team's improved show in PC defending. "I feel we have improved a lot in our PC defending. Though we need to avoid giving away PCs, we have improved in defending PCs. If we have given away 5-6 PCs in a match, we restrict conversion to 1 or at the most 2 which was not the case earlier," she said.

Grace credits this positive improvement to team's Analytical Coach Jenneke Schopman. "Since Jenneke has joined the team, we have paid a lot of attention to PC defending and earlier, we would just take positions but now she's helped us work on our movements while defending a PC and that has made a lot of difference," she said.

In the ongoing National Coaching Camp at SAI, Bengaluru, the core group has been doing drills to improve their attack and defending inside the circle. "Basis our performance in Argentina and Germany, we realised that we need to focus more on our defence inside the circle and create more opportunities with good attacking tactics. We are currently focusing on these areas," Grace stated.