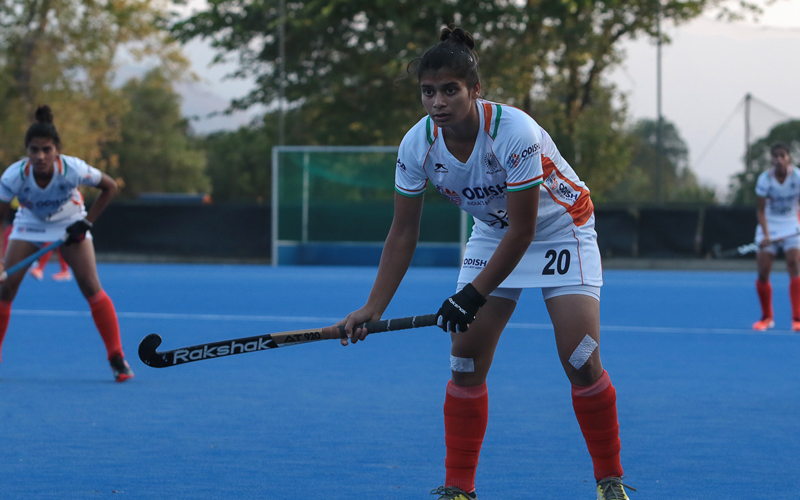 On the back of superlative displays against the Chile Juniors and Seniors last month, the Hisar-based forward now looking at increasing her goal tally in the Junior Women's Asia Cup and the FIH Junior Women's World Cup

Ahead of an all-important year for Indian hockey, forward Deepika Kumari has emerged as one of the Junior Women's team's potent weapons in attack which helped the Suman Devi Thoudam-led side register some stunning results.

Deepika scored two goals as her side went on an unbeaten run against Chile's Junior and Senior teams. "I think we showed great fitness and character in our matches against Chile," said the 17-year-old from Hisar.

"It was challenging as we played six matches in the space of eight days, and fitness was one of the key factors to keep the tempo up in back-to-back matches. Personally, I am happy to have made important contributions and execute the plans made by the Coaching staff. I hope to continue improving my game in the months ahead," Deepika added.

The fourth match of the tour saw her make the most telling contribution. Despite going behind twice, the visitors made a spirited comeback to earn a draw. It was Deepika who brought India back in the game with a well-taken goal in the third quarter.

Blessed with an eye to make quick goal-conversions, Deepika is looking ahead after the Covid-19 pandemic robbed her of game time and match practice. "We lost out on precious time last year with no training and competition due to the pandemic. Most of us were a little rusty when we played our first game in Santiago. But we managed to execute whatever we'd planned in our training sessions. The team environment also contributed. We want more of this (success) now," she said.

Deepika added: "It was difficult (during lockdown months) as I was itching to be back on the field with my teammates. Hockey India and SAI were extremely helpful during this time, they ensured we were back in camp in time. And that kept me, and my teammates stay in rhythm."

If the tour of Chile is any indication, it could be exciting times for Indian hockey fans in 2021. Peaking at the right time will be the key with the Junior Women's Asia Cup and the FIH Junior Women's World Cup coming up later in the year.

"I have to sit down with my coaches," said Deepika. "I trust them and my teammates completely. Expectations are huge (for the big-ticket tournaments) but I'm confident that we will do well in the Junior Asia Cup, that is our immediate goal. I am proud to be wearing the India jersey and want to give my absolute best for the country."

Before arriving for the National Coaching camp in SAI, Bengaluru, Deepika was swamped with visitors at her doorstep after returning from the victorious Chile tour. "People from my neighbourhood in Hisar wished me. They have always encouraged me. My family has taken keen interest in my career and they have been a big motivating factor," she signed off.