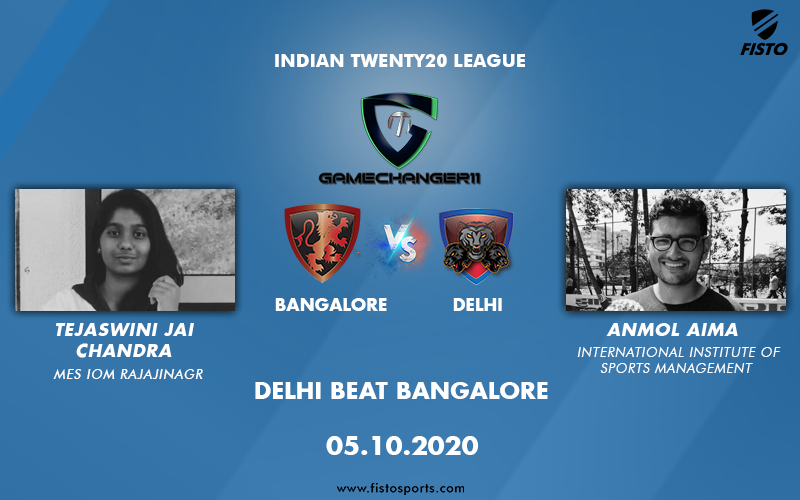 Delhi Capitals are back at the summit of the Indian Premier League table following their demolition of Royal Challengers Bangalore on Monday night at the Dubai International Cricket Stadium in Dubai.

Delhi Capitals registered their second consecutive victory in their last two matches, beating RCB by 59 runs. RCB never looked settled, chasing 197. Only, Virat Kohli 43 (39b, 4s x 2, 6s x 1) showed some mettle out in the middle and remained the top scorer for his side. Eventually, he was dismissed at the 14th over leaving the entire RCB dugout in stunt silence. With Kohli’s dismissal, Bangalore’s all hopes shattered.

RCB’s score came down to 94/5 at 13.3 overs at Kohli’s dismissal. They still needed 103 runs to win from 6.3 overs at an asking rate of 16+ runs per over. It was literally all over for RCB. What remained on the ground was just a formality!

The credit for Delhi’s emphatic victory goes to their disciplined bowling attack that rattled RCB’s much-decorated batting order, with Rabada’s 4 for 24 and Axar Patel’s 2 for 18.

DC added a sturdy 68-run stand for the first wicket between Shikhar Dhawan and Prithvi Shaw. The left-hand and right-hand pair got off to a blazing start adding plenty of runs in a short time.

The due accumulated 53 runs in the first 5 overs. Dhawan was concentrating on building the innings while Shaw went for aggressive shots. Prithvi Shaw’s 23-ball 42-run knock, including a couple of big sixes and five boundaries, set the tone of DC’s batting.

He fell at 6.4 while trying to hit a leg-glance, but ended up in Ab De Villiers’ safe hands. Following Shah’s dismissal, Shikhar Dhawan 32 (28b, 4s x 3) also went out early. He got out in the 10th over when he mistimed Udana at long-on, and Moeen Ali caught him out.

Now, Delhi were in big trouble. They lost three wickets at just 90 runs on the scoreboard.

DC’s reliable wicket-keeper batsman Rishabh Pant once again rose to the occasion hitting a fluent 37 runs off 25 balls with 2 fours and 2 sixes. He was playing well and taking on RCB bowlers.

Pant and Stoinis added a blistering 89-run partnership for the fourth wicket, which took the game away from RCB’s grab.

Thanks to Pant’s sensible-cum-attacking batting that helped Stoinis launch an all-out attack against the RCB. Stoinis 53* (26b, 4s x 6, 6s x 2) played a scintillating unbeaten knock for DC. Both of them heavily targeted Navdeep Saini smashing 35 runs in his last two overs.

Earlier, we discussed Delhi’s strategy with Anmol Aima of IISM, Mumbai. He remarked that if DC get a good start then its middle order will fully take advantage of the situation. The likes of Stoinis and Pant did exactly the same in the death overs.

In this match, DC negotiated Chahal very well giving him no chance to put pressure on them.

With 196 runs already on the board, all that DC needed were the early breakthroughs to disrupt RCB’s strong batting order.

Chasing 197, RCB didn’t look much focused. They started with their regular openers; Devdutt Padikkal and Aaron Finch. They got an asking rate of around 10-RPO to follow from the very first ball.

The Men-in-Maroon needed at least a boundary every over to successfully chase down DC’s total. But, Devdutt Padikkal (4) got dismissed while trying to hit Ashwin and caught by Stoinis.

Thus, Ashwin gave the much-needed breakthrough to his side.

Padikkal was in really good form as he already hit three half-centuries at this edition of the IPL. Now, the entire attention shifted to Virat Kohli as the skipper got off to mark in style with his trademark cover drive on the very first ball he faced.

RCB’s joy was short-lived as they faced another big blow when Axar Patel removed Aaron Finch (13) at a cheap score. RCB’s scoreboard came down to 27/2 after four overs.

Still, fans were hopeful that RCB would chase down the total as two of the best finishers; Virat Kohli and Ab De Villiers were out in the middle. Both the right-handed batsmen were measuring each ball on merit.

But, Nortje’s second over did the unimaginable. At 5.4 overs, De Villiers had cracked a wonderful shot at extra cover for a boundary, but in the very next ball Dhawan caught him at mid-wicket off Nortje.

Only Virat Kohli was the sole hope for his fans and team RCB!

Looks like we jinxed it🙃 7 clean catches after that😐 @DelhiCapitals were the better team on the night https://t.co/mPzHsjqQJ0

Unfortunately, that hope didn’t last long as he also got out at the 14th over in the form of RCB’s fifth-wicket. Thus RCB’s scorecard came down to 94 for 5. With half of the RCB’s star-studded batsmen already out, and a staggering asking rate of 16+ RPO to follow – only miracles could save this match for RCB.

We discussed RCB’s strategy with Tejaswini Jai Chandra, MES IOS – Rajajinagar, Bangalore. She was fully confident about RCB’s victory in this match.

At the end of DC’s 20 overs, DC put 197 runs on the scoreboard. But, RCB could chase that successfully because they have gifted batsmen in their squad.

Unfortunately, losing too many wickets at quick intervals and no big partnerships between RCB batsmen along with DC’s disciplined bowling ensured Delhi’s big win over RCB in an almost one-sided manner.

Can DC go all the way and clinch maiden IPL title?